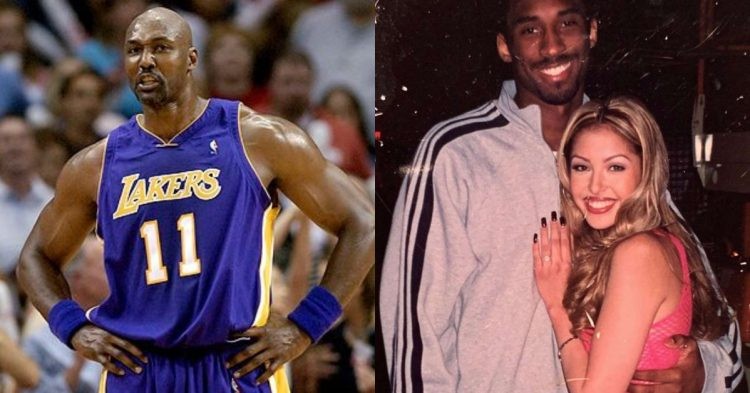 Hall of Famers Karl Malone and Kobe Bryant had a longstanding feud, which spanned almost a decade. The root of the feud, reportedly, was some comments that Malone made to Kobe’s wife, Vanessa Bryant, during a Lakers game in November 2004.

Kobe and Karl were believed to have been best friends before this incident, and their families got along nicely as well. Malone, who was 41 at the time, had a wife, Kay, and a son. Kay and Vanessa got along well and were close. But after the incident, things got bitter and even spilled over to the public.

At a home game against the Milwaukee Bucks on Nov. 23, 2004, in which Kobe was playing and Malone was sitting out due to an injury, Malone is said to have made “several inappropriate comments” to Bryant’s wife, according to Rob Pelinka, who was Kobe’s agent at the time.

Pelinka said that Malone had asked Vanessa to sit next to him, and had also asked her if she liked him.

In response, Malone’s agent Dwight Manley later revealed that Vanessa had reportedly questioned Malone, “Hey, cowboy, what are you hunting,” in reference to Malone’s boots and cowboy hat which he was wearing at the time. “She said it twice,” Manley said, “and Karl answered, ‘I’m hunting for little Mexican girls.’ “

Mailman’s delivery to Kobe’s wife sparks war: KARL Malone and Kobe Bryant have had a longstanding beef that stretches back over a dec…

Manley claimed that Malone admitted to him that he had never made a pass at Bryant’s wife and that he was shocked by the accusation. Malone also indicated that he had apologized to Bryant and his wife for any words that they may have thought were inappropriate, according to Manley.

Vanessa Bryant is of Mexican descent and was 22 at the time of this incident. She got married to Kobe in 2001 and gave birth to 4 daughters, Capri, Natalia, Bianka, and the late Gianna Bryant. Kobe was very upset with Karl after their feud, and seemingly never reconciled.

Back in 2015, Malone had shared his feelings about it all. “We had a little issue. I’m a grown man. I’m a grown man, too,’’ Malone told host Marc Lamont Hill of Huff Post Live. “Are we cool? I don’t hold grudges. But here’s what I’d say to anybody: If Kobe don’t like me today, that’s Kobe Bryant’s fault or his problem. I don’t have no problem. I come in peace, but I do prepare for war if I have to.’’

Karl announced his retirement from the NBA shortly after the incident.