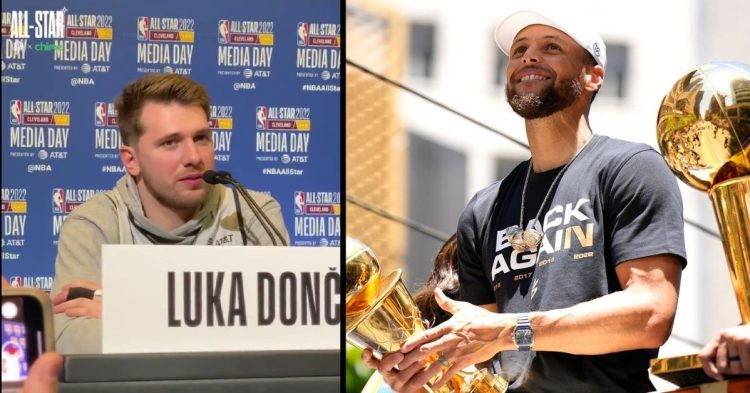 Luka Doncic and Stephen Curry finally faced each other in the NBA playoffs this year. The Golden State Warriors and the Dallas Mavericks matched up in the Western Conference Finals. The series ended with the Warriors winning in 5 games and moving on to the NBA Finals. Both stars are the cornerstones of their respective franchises and are considered some of the top players currently in the league.

With that being said, there is a sense of both respect and rivalry between Steph and Luka. This was the first time Luka was able to carry his team past the first round of the playoffs. He eliminated the conference champions Phoneix Suns in the second round to face the Warriors, where his postseason run finally came to an end. He recently described Steph in a single word. NBA fans might wonder what this word is and whether it is a compliment or an insult.

This actually occurred during the 2022 NBA all-star game held in Cleveland. We are already familiar that Steph Curry put up a show in this game and ended up winning the NBA all-star game MVP award. Luka was one of the many players invited to participate in the game.

He was present for the media day heading up to the All-Star game and spent the day answering questions that interviewers and fans sent his way. It seems to have become a common trend for players to be asked about other players. That allows us to know about their personal opinions and what they are willing to reveal to the media. Moreover, it also creates hot takes and something for the news reporters to write about.

Perhaps, Doncic was growing weary of the longwinded questions and their follow-ups. Thus, when he was asked about the Warriors superstar, he asked if he could respond with a single word. The reporter obliged this request and asked him what the word was.

“Unbelievable” came the quick response. That is quite a vague statement in itself and he was asked to share a few more words on the “baby-faced assassin”.

How would Luka describe Steph? 🤔pic.twitter.com/6GDRCCT1IR

This caused quite a humorous reaction from the audience and they decided not to push him to compliment Steph further. In any case, Luka can find peace knowing he lost last year to an unbelievable amazing player. However, if he wants to win an NBA title, he will have to be even better than that to carry his team to the promised land.