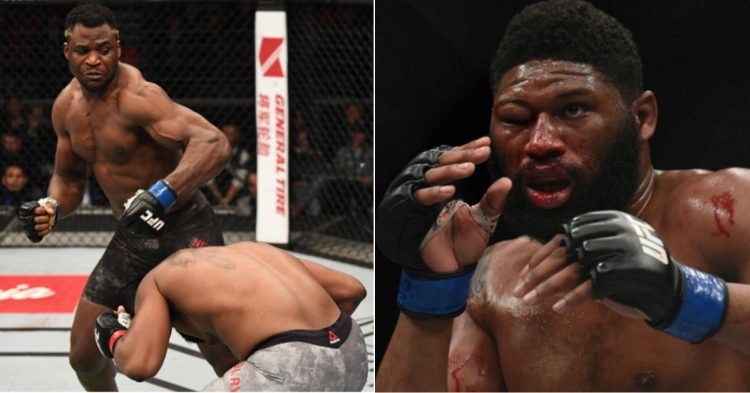 Curtis Blaydes and Francis Ngannou have shared the UFC Octagon twice and on both occasions, Ngannou has emerged victorious via TKO/KO.

Francis Ngannou makes the doctor step in against Curtis Blaydes

Blaydes is slowly earning a reputation for his power, however, that wasn’t the case early in his UFC career. On the other hand, as we all know, Ngannou was a force to reckon with and continues to be. Needless to say, when both these fighters shared the cage, it was a striker vs wrestler contest.

Then undefeated Curtis Blaydes took on Francis Ngannou in his UFC debut. Blaydes’ gameplan looked quite clear against Ngannou, however, in his attempt to take him down, Blaydes paid the price with several straight rights from the Predator. The damage from Ngannou was too much to handle and left Blaydes with a shut-eye. Severely compromised Blaydes wasn’t allowed to continue by the Doctor and rightfully so.

To take on someone like Ngannou with one eye and on top of that, when your wrestling is not working, is definitely not a good idea.

While the first fight at least lasted for two rounds, the rematch was a very short affair. It took Ngannou just 45 seconds to knock the lights out of Curtis Blaydes.

Once again, Blaydes paid the price for closing the distance with Francis Ngannou in his attempt to take him down. Ngannou sent Blaydes down with an overhand right.

Several unanswered shots and the referee had to step in. While Blaydes criticized the stoppage, it’s safe to say it was the right call from the referee who had seen too many of those powerful shots from Francis Ngannou.