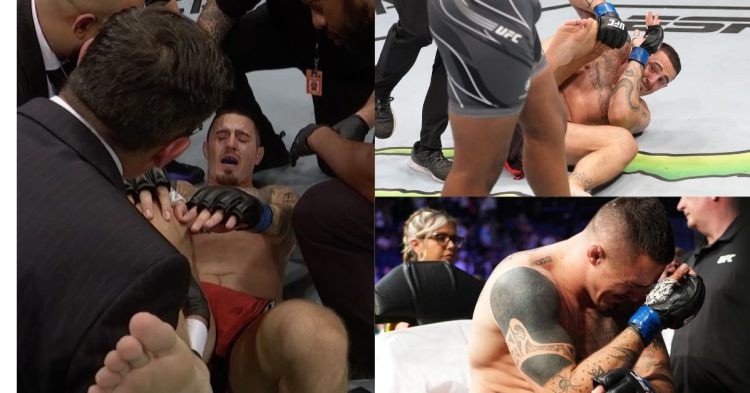 Tom Aspinall stepped inside the octagon to headline his second UFC event as he clashed against Curtis Blaydes in a five-round heavyweight bout that took place at the O2 Arena in London, United Kingdom. The British heavyweight fought in front of his home crowd against unarguably his toughest matchup of his UFC career so far.

Leading into this bout, Aspinall’s undefeated UFC streak was on the line as he had previously finished all five of his opponents since making his debut in 2020. There was a lot at stake for #4 heavyweight contender Razor who was on the back of a two-fight winning run after knocking out Chris Daukaus in his last bout.

With both heavyweights extremely dangerous in both striking and grappling, it was anticipated to be a close fight. However, the fight ended in one of the most dramatic fashion as Aspinall injured his right leg early in the first round.

Both the heavyweights started the fight aggressively and traded some punches. During this exchange, Tom landed a leg kick and soon later he fell to the ground. Thereafter the referee quickly stopped the fight and the medics arrived inside the octagon to treat the British fighter.

Michael Bisping spoke to the doctors and they’re speculating it’s an MCL injury given the amount of pain Tom Aspinall was in, what does everyone else think the injury might be? pic.twitter.com/8e5rzah06o

Blaydes was confused after what happened to Aspinall and during the break, commentators Michael Bisping and Paul Felder insinuated that the British heavyweight contender might have suffered an MCL tear. Felder speculated that Tom Aspinall injured his leg due while stepping back and landing in an awkward manner. The Count also added that a scan would give a clear picture of this entire situation.

Tom Aspinall who was on a terrific five-fight winning streak suffered his first UFC loss against Curtis Blaydes at UFC London after sustaining an unfortunate leg injury in the first round of the fight.

After the freak incident, the British fighter was in agony and subsequently, the doctors tried to help him deal with his injury. However, Aspinall was in no condition to get back on his feet and had to be carried outside the octagon.

Gutting scenes, and we’re all wishing Tom Aspinall a speedy recovery. 👏@RazorBlaydes265 gets the win, but not how anyone would’ve wanted it. #UFCLondon pic.twitter.com/4bL56mtw6H

It is needless to say that both the heavyweights along the fans are disappointed with how the fight ended as everyone was expecting a violent showdown. Hopefully, Tom Aspinall has not suffered an MCL tear as a big injury like that would keep him out of the sport for an extended period.

Tom Aspinall Cries in Agony After Breaking His Leg Against Curtis Blaydes, Leaves O2 Arena on a Stretcher at UFC London