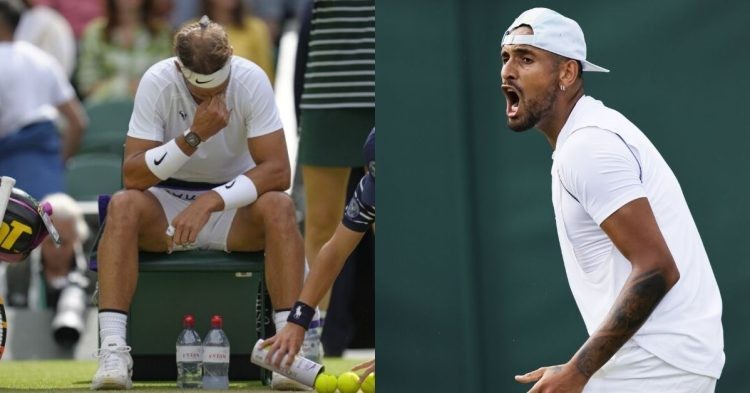 The match between Rafael Nadal and Nick Kyrgios was expected to be the most exciting match of Wimbledon this year. Every tennis fan was looking forward to the match especially because of the up-and-down relationship between the two players.

However, as fate would have it, Nadal has decided to withdraw from the match due to an abdominal injury. It means there won’t be any match between the Spaniard and Kyrgios. However, one might think what will happen to Kyrgios now that Nadal is not participating in the tournament anymore.

The Aussie has got a walkover and will now go straight to the final. It also marks the first grand slam final of his career. He will play the winner of the second semifinal where Novak Djokovic will take on Cameron Norrie. While he would be disappointed about not playing Nadal, he would be happy to relax for one more day before the final.

We’re sad to see it end this way, @RafaelNadal

Thank you for another year of unforgettable moments at The Championships#Wimbledon pic.twitter.com/XadiEVxaWF

Nadal’s participation was already in doubt when fans saw him struggling against Taylor Fritz in the quarterfinal. He found it extremely difficult to serve and won the match purely on his mental strength and control over rallies.

Kyrgios has had some tense moments with Nadal on the court but he set everything aside to wish his opponent a speedy recovery. The Aussie took to Instagram to wish the 22-time grand slam winner a speedy recovery.

He shared a picture with Nadal where the two are seen shaking hands after a match. Moreover, the caption read, “different players, different personalities. @rafaelnadal I hope your recovery goes well and we all hope to see you healthy soon.”

This is the most impressive performance of Kyrgios at any grand slam. He is clearly in great form and has the potential to lift the Wimbledon trophy. He might be hoping to face Norrie in the final instead of Djokovic. If he keeps his calm and doesn’t create any more controversy and drama, he has a real shot at winning Wimbledon.