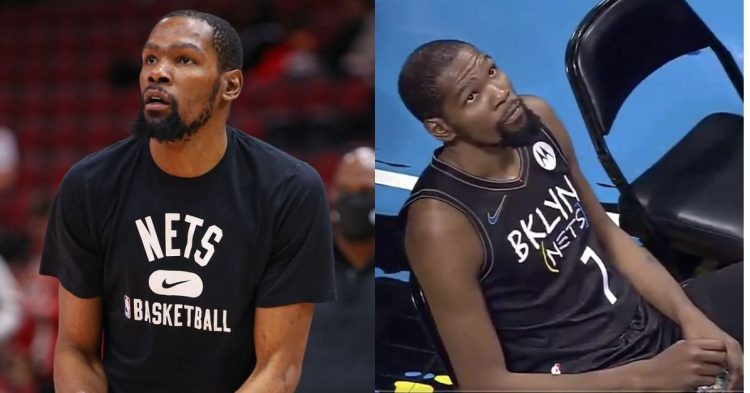 Kevin Durant is an NBA superstar who has switched teams twice in his career so far. He has recently requested a trade from his current team, the Brooklyn Nets, after the disappointing season they had. His team was eliminated in the first round of the NBA playoffs by the Boston Celtics. Moreover, they were swept in 4 games.

There are several reasons the Nets underperformed. Kyrie Irving did not want to get the vaccine despite it becoming an enforced rule. This caused James Harden to feel frustrated and eventually force his way out of the team. The team finished the season as a lowly 7th seed. All these reasons have seemed to have an impact on KD and he has requested a trade despite signing a contract after the 2021 season.

One must wonder what will happen if the Nets do not trade Durant. After all, he has 4 years left in his deal. This is an interesting situation that must be understood further.

Several years ago the player was under the control of the franchise. They were the ones who paid him and he would just have to deal with whatever situation he may be going through. However, the modern NBA focuses on player empowerment. Simply put, Kevin Durant is more valuable to the Brooklyn Nets in comparison to how valuable they are to him.

As we discuss this issue, trade talks are going on between various teams and the Nets. The problem is that Brooklyn is simply overestimating Durant’s current value and asking for too much in return for him. Well, at least that looks to be the case.

Boston, who was looking to trade Jaylen Brown, Derrick White, and a few drafts picks in return for KD were downright rejected. Brooklyn demanded that the Celtics package Marcus Smart and another key roleplayer in the deal if they wanted Durant.

An unhappy player usually destroys team chemistry and is the cause of tension. If Durant is not traded and loses the motivation to carry this team, his value will decrease even more in the future. KD says he wants out now. In a year or two, he will want out even more but will not be playing at the level he is at right now. Therefore, it makes the most sense for the Nets to get this done.