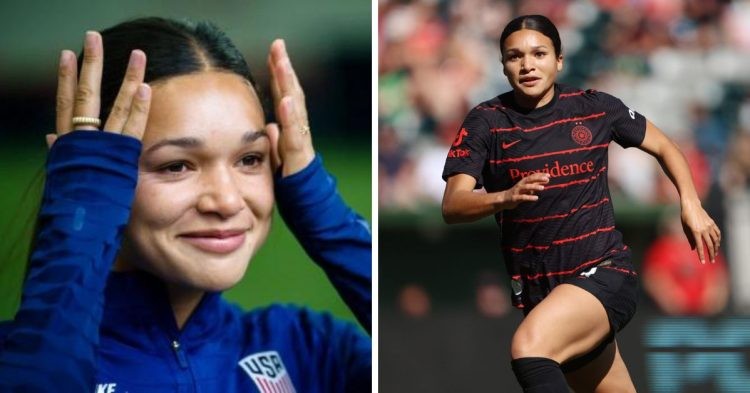 Sophia Smith is the 2022 U.S. Soccer Female Player of the Year. As a rising star in the international soccer scene, Sophia Smith is an inspiration to many young soccer players across the world.

She was selected as the 2022 U.S. Soccer Female Player of the Year. She won the award by a wide margin, garnering 50.8% of the total votes, far surpassing second-place finisher Alex Morgan from the San Diego Wave at 18.4%. Smith had an incredible season, earning the NWSL MVP trophy and becoming the youngest player to do so.

Sophia Smith is the US Soccer Female Player of the Year 🔥

The 22-year-old is the youngest player to win the award since Mia Hamm in 1994 pic.twitter.com/hBq0wEyNoU

“Obviously this is surreal, and I’m super humbled, It’s been a very exciting year, and certainly there’s been some challenges, but just being able to grow and develop in the environments with the national team and the Thorns, and being surrounded by such amazing players, players that I have looked up to for so long, has pushed me to become a better player and person,” Smith said.

Smith became the 19th distinct recipient of the award since its inaugural ceremony 38 years ago and is the youngest American female soccer player to take home the honor since Mia Hamm, who was 22 at the time, in 1994. She contributed 11 goals for the USWNT in 2022 and began the most games for them in that year.

Additionally, Smith scored 14 times during the regular season for the Portland Thorns and then scored again in the NWSL championship to help her team win its third title.

Sophia Smith is a mixed-race player whose ethnicity is comprised primarily of African-American, and Native American heritage.

Where is Sophia Smith from?

Sophia Smith was born in Windsor, Colorado, and attended Fossil Ridge High School in Fort Collins, Colorado. She showed tremendous promise even as a freshman, earning a spot on the First-Team All-Conference. She also played for the varsity basketball team.

Smith brought her talents to Stanford University in 2018, where she scored 7 goals that season and 17 in the next. During the 2019 College Cup, she scored three goals in one game to help Stanford win the semifinal against UCLA. The team ended up winning the national title in a penalty shootout in the final.