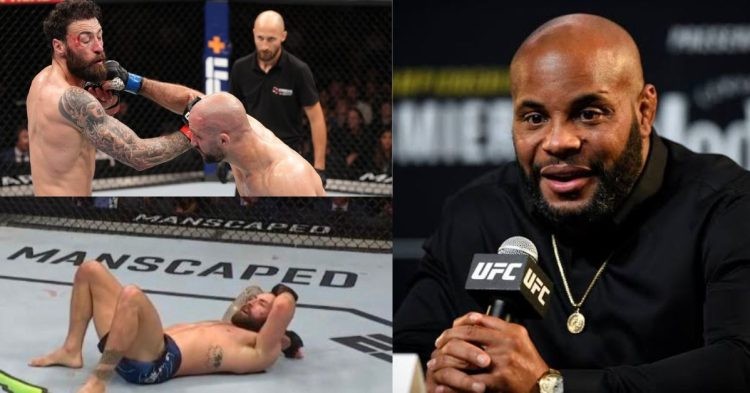 Paul Craig kicked off the UFC London: Blaydes vs Aspinall main card as he squared off against Volkan Oezdemir in a three-round bout that took place in the packed O2 Arena. Going into this fight, Craig was on the back of a brilliant four-fight winning streak.

On the other hand, his opponent Volkan was on a two-fight losing skid. Before the fight started, it is needless to say that Bearjaw was the betting favourite given his win streak and all-around skills. However, Paul Craig approached this fight with a bizarre strategy as he only attempted submissions throughout the three rounds.

Craig managed to land a underwhelming total of 33 strikes and failed to deal anything significant or pose a threat to Volkan with his submission attempts. The referee had to intervene many times as Bearjew continued to pull guard in order to trap his opponent.

However, this didn’t work and Oezdemir took full advantage of Paul Craig’s poor strategy and stunned him with jabs and also landed several ground and pound strikes. No Time came close to finishing the fight on a few occasions but Paul managed to survive the onslaught and the fight went to the distance. Volkan ended the four-fight winning streak of Paul Craig as he won this matchup via unanimous decision.

Paul Craig is undoubtedly one of the toughest light heavyweight fighters in the division. Despite being exceptional on the ground, his strategy to only rely on his submission skills turned out to be the biggest reason for his loss against Volkan Oezdemir.

What is Paul Craig doing ? He needs to take some chances on his feet. He is losing this fight by continuing to pull guard. Volkan up 2-0 and he is still doing it

Paul Craig when someone breaks into his house. pic.twitter.com/v07G7uJDwF

It is needless to say that Paul Craig will go back to the drawing board and reassess his mistakes and comeback strong because he has the skills to rise to the top of the 205 pound division.