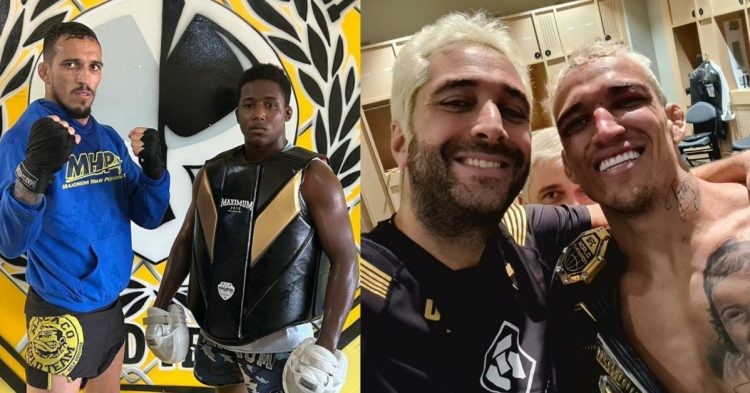 Chute Boxe Academy is one of the most acclaimed MMA gyms in Brazil. Over the years, fighters like Mauricio ‘Shogun’ Rua, Cris Cyborg and Anderson Silva have been a part of the gym. All of those fighters have held the UFC belt in their career. The latest product of the gym to hold a UFC title is Charles Oliveira.

Charles Oliveira is the unlikeliest champion in UFC history. Not many fighters had 8 UFC losses on their resume before capturing the title. Just to put things into perspective, Jiri Prochazka had only 2 fights in the UFC before getting a title shot at UFC 275. It just shows how rare fighters like Oliveira and Michael Bisping are, who won the title at a very late stage in their career.

However, Charles Oliveira did not just flick a switch and become a world-class fighter all of a sudden. From the beginning of his pro MMA career in 2008 to 2018, Charles was a part of the Macaco Gold Team. Although he made it to the UFC under the gym, Do Bronx eventually realized that he will have to move on to something better to take the next step in his career and Chute Boxe Academy it was!

Charles Oliveira gives insight into how he prepares at Chute Boxe

As mentioned previously, Charles Oliveira joined the legendary Chute Boxe in 2018. His last loss in the UFC came in 2017 against Paul Felder. However, he kicked off 2018 with an impressive win over Clay Guida at UFC 225. That was the start of the 11-fight win streak which saw him finally become the UFC lightweight champ at UFC 262.

What is incredibly impressive, is the fact that 10 of those 11 wins have come via stoppage. In the meanwhile, he has become a physical beast as well. His BJJ skills are legendary and the 16 submission wins in the UFC just prove that. But he has worked on improving his striking as well. Recently Justin Gaethje said Oliveira’s power is unlike anything he had ever encountered before!

Even Gaethje’s coach Trevor Wittman admitted that Oliveira’s mentality has changed immensely and there is no quit in Do Bronx in recent times. So what has changed? Recently Oliveira spoke up and gave a lot of credit to Diego Lima and Chute Boxe Academy for the dramatic turnaround of his career.

In the same interview, Oliveira also gave a brief peek behind the scenes at how he prepares along with his teammates. It does not look like the legendary gym has changed its ways of preparing its fighters for the upcoming bouts. Charles goes full throttle in the training sessions and prepares for war!

Even the UFC flyweight champ Deiveson Figueiredo has recently joined the gym and will hold his next fight camp there. Chute Boxe has a great reputation and Charles Oliveira’s meteoric rise has shone the light on all the good work that the gym is doing for its fighters. Oliveira will face Islam Makhachev next at UFC 280 for the vacant 155lbs title.