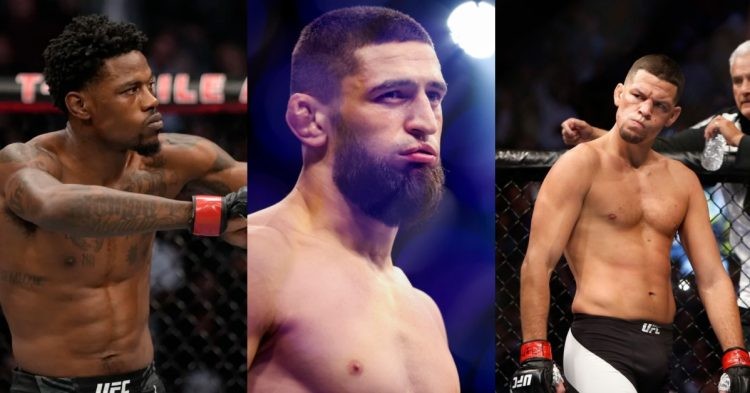 UFC 279 press conference was cancelled earlier for security reasons as a massive melee took place backstage. The company always tries to put out content for the fans to enjoy. But the incident was apparently so serious that they had to abandon the press conference.

Reports stated that things got rough when one-half of the UFC 279 main event, Khamzat Chimaev ran into Kevin Holland. Chimaev was apparently unhappy and he confronted the Trailblazer. Known for being an occasional troll, Holland had previously trashed Chimaev for his antics on camera.

During a press junket for the event, Kevin stated that Chimaev only acts as a tough guy whenever he is infront of the camera. When he is not around the media, Chimaev is apparently a very friendly guy. Holland called out Khamzat’s hypocrisy and called him a “wannabe.” It obviously ticked off Chimaev.

According to a report from Yahoo, Khamzat apparently threw the first kick toward Holland. Fortunately, Tiki Ghosn was around the scene to calm things down. He managed to come in between both the fighters and sorted out the scenario for the time being.

How did Nate Diaz get involved in the brawl backstage at UFC 279 press conference?

When the scuffle between Khamzat Chimaev and Kevin Holland was going down, Nate Diaz was nowhere on the scene. Known for travelling with his entourage, the 37-year-old was yet to arrive in the arena. He reached the scene once everything was calm between Chimaev and Holland backstage.

But, upon their arrival, Nate’s team witnessed that Tiki Ghosn was with Chimaev’s team. Unaware of the scuffle before they arrived, the Diaz camp was extremely displeased to see Tiki side by side with Chimaev.

According to Ariel Helwani, the situation promoted the two sides to have some words back and forth. It got to a stage where there were water bottles thrown from both sides. Apparently, Nate’s team had over 50 people, while Khamzat also had over 30 people by his side. Hence, going on with the press conference would have been a massive security hazard.

So cancelling the press conference was the right call. In case the UFC had gone through with it, there was a chance that the fighters could have engaged in a brawl once again. If any of the fighters got injured, it would have put the event in jeopardy.

Dana White addressed the journalists following the incident. He did not want to get into the details of what really happened backstage. But all 4 fighters in the high-profile spots were apparently involved in the fiasco one way or the other. When Dana took the stage to announce that the press conference was cancelled, he was met with loud boos from the fans in attendance.

“Let me just start off by saying, I’m not gonna tell everybody what went on back here. But, you know, there was multiple, crazy, you know I don’t even know what to call it. However many years, 22 years, however long I’ve been doing this, We never had an incident like today. Just all hell broke loose out here.”

Dana stated that an incident like this is unprecedented. Although they were caught off guard on this occasion, Dana expressed that UFC will be prepared for something like this in future. But he assured the press that there will not be any punishments or fines for the fighters involved in the brawl.