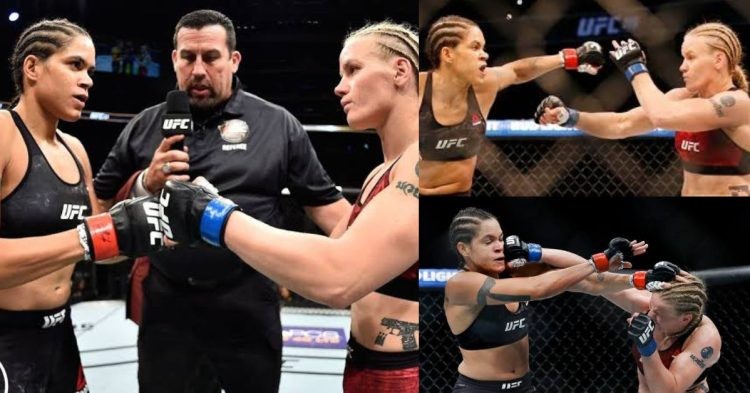 Amanda Nunes and Valentina Shevchenko are unarguably two of the greatest female fighters in the history of the UFC. These two fighters have completely dominated their respective divisions for a long time and have retained their crown as champions.

Consequently, fans have often argued as to who is the GOAT and the names of Nunes and Shevchenko are always thrown into any discussion. Interestingly, these two fighters have collided against each other inside the octagon twice.

On both occasions, The Lioness defeated Shevchenko and established her superiority in their matchups. However, both the fights were extremely close and the result of one of those fights turned out to be extremely controversial as many fight enthusiasts and experts claimed on the internet that Valentina had done enough to win the fight.

As we move ahead, let’s take a look at the scorecards of both these matchups and how the fights between these two greats played out.

Amanda Nunes and Valentina Shevchenko first squared off against each other on March 5th, 2016 on the main card of UFC 196: McGregor vs Diaz. This fight was contested in the bantamweight division and was scheduled for three rounds.

In this matchup, Amanda Nunes was aggressive from the first minute of the fight. She landed some good kicks and didn’t allow Shevchenko to close the distance. The Lioness outstriked Valentina and won the first round. Nunes carried the same momentum going into the second round and landed a takedown and controlled her rival on the ground for a significant period.

The Brazilian bantamweight landed several ground and pound strikes and inflicted some serious damage. She even attempted a rear naked choke and almost submitted Valentina. But Bullet showed great resilience and got out of the submission attempt.

Thereafter in the final round, it was Shevchenko who dominated Nunes on the standup and outstriked her significantly. However, the turnaround came too late and Amanda Nunes won the fight via unanimous decision as the judges scored the contest 28-29, 27-29 and 27-29.

How did the rematch between Amanda Nunes and Valentina Shevchenko play out?

One year later in 2017, these two rivals clashed again in a rematch in the main event of UFC 215 and this time around Amanda’s bantamweight championship was on the line. Unlike the first fight where both the fighters were aggressive from the minute go, this time Amanda and Valentina had a completely different approach.

The pace of the first round was very slow and it favoured the champion as she landed some good leg kicks. In the second round, Bullet closed the distance and struck Nunes with some good shots She landed several jabs and put her striking skills on display.

Amanda constantly attacked Shevchenko with her leg kicks and attempted some big strikes in the third round. The fight was very close and it was unclear who was on top going into the championship rounds. In the final round of the fight, Amanda capitalised on Valentina’s mistake and landed a takedown.

She controlled Bullet for nearly two minutes on the ground. However, it was Valentina Shevchenko who ended the fight on top as she landed some nasty kicks from the bottom position. In the end, it became very difficult for the judges to score the rematch as both Nunes and Shevchenko had their moments.

Here’s the scorecard for Amanda Nunes vs. Valentina Shevchenko for those curious #UFC215 pic.twitter.com/i5Y82G0gPj

The rematch resulted in a split decision win as the judges scored the contest 47-48, 48-47 and 48-47 in favour of Amanda Nunes. It is needless to say that both these fights were extremely exciting to watch and it would be fascinating to see how a trilogy would play out if these two ever square off against each other for one final time.