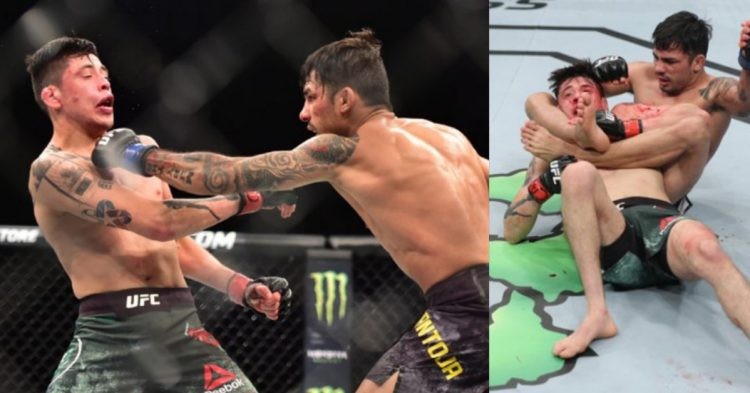 Brandon Moreno has lost to Alexandre Pantoja twice inside the Octagon. (Images via Twitter)

Brandon Moreno is the former UFC Men’s Flyweight Champion. The Mexican fighter has become a massive superstar partly because of his exciting fighting style. But he is also one of the most humble fighters on the UFC roster. Moreno overcame many adversities in life to reach the very top of the sport.

He is also a part of one of the most iconic trilogies in UFC history. Moreno’s series of fights against Deiveson Figueiredo will go down in the history books as some of the most entertaining championship fights of all time. So it is safe to say that Brandon has built an astonishing legacy for himself.

However, there was a point in time when it seemed like Moreno was doomed to spend his entire career outside the UFC. After an incredible debut win over Louis Smolka in 2016, Moreno soon accumulated 3 back-to-back wins. But his run came to a screeching halt against Sergio Pettis. Pettis dominated the contest and handed Moreno his first UFC loss.

Following the loss, The Assassin Baby desperately needed a win in his next fight. Unfortunately, he could not overcome Alexandre Pantoja in 2018 and he got cut from the UFC. But that was not the only time they fought. Moreno and Pantoja had an exhibition bout at The Ultimate Fighter 24 as well. So what really happened in the fights? Let’s find out.

Brandon Moreno and Alexandre Pantoja have crossed paths twice in the UFC. They were initially matched up against each other during The Ultimate Fighter 24. However, TUF fights do not count as sanctioned bouts. So it was an exhibition contest between the two. Although Moreno had his moments, Pantoja got the win by submission in 2016.

Alexandre Pantoja was the no. 1 seed for the show, whereas Brandon Moreno was no. 16. But that did not reflect on Moreno’s performance. He landed huge strikes on Pantoja and seemingly stunned him a few times. However, he paid the price for a lack of ground skills.

They stood across the Octagon once more in 2018. They fought in the prelims of UFC Fight Night: Maia vs Usman. Although Moreno had a much better showing against Pantoja this time around, the result was the same. Pantoja outshined him in every aspect of the contest. Nicknamed ‘The Cannibal,’ Pantoja landed 96 strikes in total, of which, 79 were significant strikes.

Moreno, on the other hand, landed 45 significant strikes and only 50 strikes in total. So it goes to show that Brandon was only looking for big strikes during the fight, as opposed to focusing on setting up any sort of traps. Although Moreno did secure 2 takedowns, Pantoja had more control time on the ground with 1:12 minutes, whereas Moreno only maintained control for 16 seconds.

The judges ultimately scored the bout 30-26, 30-26 and 29-27 for Pantoja. Judging by the stats, Alexandre Pantoja definitely deserved to get his hands raised after the bout.