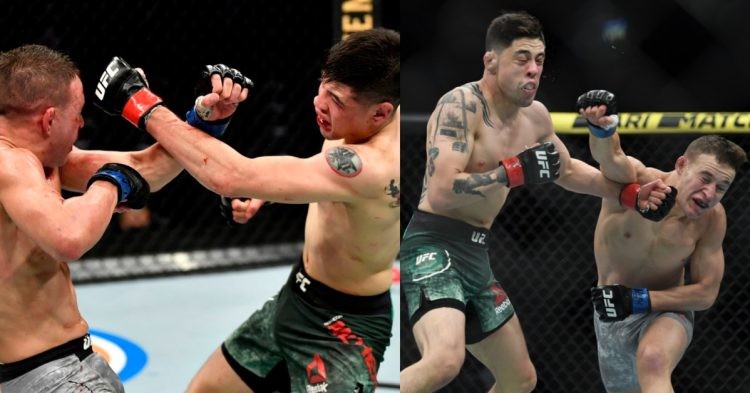 UFC 277 will feature an interim title fight for the men’s flyweight division. News broke during the UFC 274 broadcast that former flyweight champion Brandon Moreno will be fighting Kai Kara France for the interim UFC Men’s Flyweight Championship. The bout will take place in the co-main event of the fight.

There were rumours that the UFC was looking to book a fourth fight between Moreno and the champ Deiveson Figueiredo. They have already had 3 fights where both have won 1 fight each and the other was a draw. But Deiveson is currently recovering from a hand injury which made the bout impossible to take place. Hence, the interim title makes a lot of sense.

Scores to be settled with titles on the line – #UFC277 fight week starts 𝐑𝐈𝐆𝐇𝐓 𝐍𝐎𝐖!

Moreno’s opponent for the fight will be Kai Kara France. He is a teammate of current UFC middleweight champ Israel Adesanya. Kara France is a very exciting talent who is currently on a 3-fight win streak. It includes a knockout win over the former UFC 135lbs champion Cody Garbrandt. So there can be no doubt over the fact that two of the most deserving candidates have gotten the opportunity.

However, some fans may not know that they fought once previously in 2019. Moreno got the win via unanimous decision during their clash at UFC 245. However, the end result does not tell the whole story of the fight. How did the contest actually go? Let’s find out.

The first fight between Brandon Moreno and Kai Kara France took place in the early prelims of UFC 245. But the placement of the bout is not an indication of the quality. The bout took place when the arena was much emptier and it was a blessing in disguise as the sound of the punches was very clear. From the sound, it was evident that both generated an insane amount of power behind their strikes.

Although Moreno does have a BJJ black belt, he did not need to use his ground game for this fight. It was really a tale of two halves. The first half of the bout belonged to Kai. His jabs were on point and his movement gave Moreno a great deal of trouble. He almost dropped The Assassin Baby in the first round with a massive right hook.

But Moreno made some key changes in the second round. Unlike the first round, Moreno did not load up on his punches in round 2. Instead, he started using his jab more. Moreno fired up a jab whenever Kai decided to close the distance. It allowed the Mexican to keep Kai at a distance where he could fire head kicks and body kicks at a regular interval.

It visibly unsettled the Kiwi as he could not find a way through Moreno’s offence. Although he did land a few significant strikes in the latter part of the fight, it was not enough in the judges’ eyes for Kai to win the contest.

The judges ultimately scored the bout in favour of Moreno. Two judges had it 29-28, 29-28 while one judge scored the bout 30-27 for Brandon. However, the bout was almost 3 years ago and a long time has passed since then. Although the result of the first bout is somewhat significant, it will not matter when they step inside the Octagon one more time.