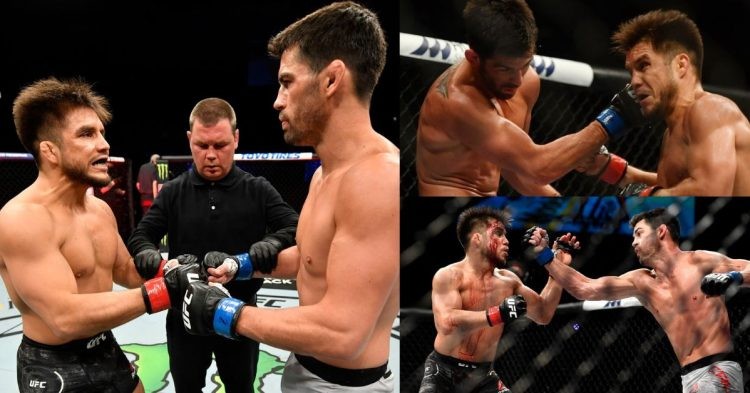 Dominick Cruz is one of the greatest bantamweight fighters in the history of UFC. The two-time bantamweight champion has a stellar record of 24-3 and has registered wins over big names like Demetrious Johnson, TJ Dillashaw, Urijah Faber and many others.

However, he has gone through several lows in his glorious 11-year UFC career. Owing to the fact that he has suffered injuries in both his ACLs, torn quadriceps, a torn groin and a shoulder injury. Regardless of the turmoil, The Dominator has battled through all the injuries and has always managed to bounce back.

After staying out of the sport for nearly four years from 2016 to 2020 due to a major injury, Cruz made his UFC return against Henry Cejudo in the co-main event of UFC 249.

The Dominator had a great opportunity to create history by becoming a three-time champion against two-division titleholder Triple C. At that time, Cejudo was on an unstoppable run as he outclassed the likes of Dillashaw, Mighty Mouse, and Marlon Moraes and was on a five-fight winning streak.

It is needless to say that fight fans around the world were extremely excited for this matchup as two of the greatest bantamweight fighters squared off against each other for the belt. It appeared like Cruz who had lost only once in the UFC before this fight would pose a tough challenge to Henry Cejudo.

Unfortunately, his return didn’t go according to his plans as he suffered a brutal knockout loss in the second round. As we move ahead let’s take a look at the scorecards and analysis of the matchup between Cejudo and Cruz.

How did the UFC 249 title fight between Henry Cejudo and Dominick Cruz play out?

Dominick Cruz had a sizable advantage over Henry Cejudo in terms of height and reach. Hence it is needless to say that everyone was expecting The Dominator to out-strike Triple C and inflict a lot of damage in their title fight at UFC 249. Whereas fight fans were anticipating Cejudo to keep the fight on the ground.

However, Cejudo surprised everyone and came out with a great game plan. He took Cruz apart with his powerful leg kicks in the first round of the fight. The bantamweight champion was quick and didn’t allow Dominick to settle and strike from afar.

This made Cruz close the distance in the second round and attempt big strikes. To which Triple C showcased great defense and landed some beautiful counter hooks. The champion picked the right moments to push the pace and attacked Dominick with a combination of strikes.

During one of the exchanges in the second round, there was an accidental clash of heads and the referee stopped the fight. Cejudo’s head was bust open but after getting cleared by the medical team, the fight was resumed.

In the dying seconds of the round, Cejudo landed a vicious knee and dropped Cruz. Thereafter he delivered a barrage of big ground and pound strikes and referee Keith Peterson quickly stopped the bout.

The Dominator was extremely unhappy with the stoppage and he sounded off on Keith Peterson during the post-fight interview. Several fans and experts on social media also claimed that it was an early stoppage and criticized the referee.

It is needless to say that Keith Peterson’s decision was highly controversial as there were only a few seconds left on the clock. Do let us know in the comments section your thoughts about the matchup between Cejudo and Cruz.