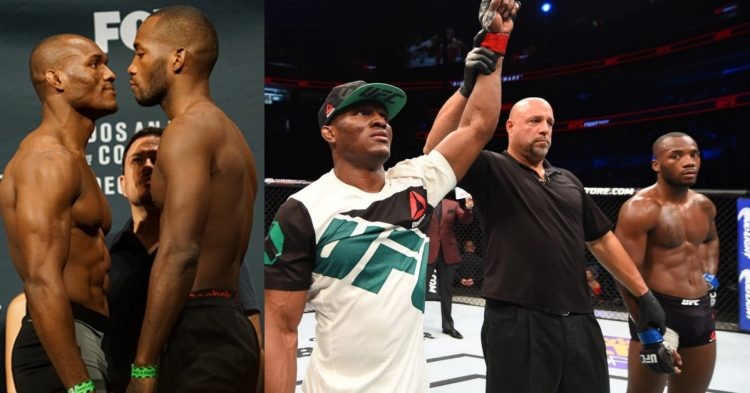 This weekend’s UFC 278 will see the welterweight champ, Kamaru Usman, defending his belt against Leon Edwards. The event will go down inside the Vivint Arena in Salt Lake City, Utah.

The champion is currently on a record-breaking run. He holds the record for the longest unbeaten streak in the 170lbs division. Usman has been unbeaten in his entire UFC run of 15 fights. Amongst the wins, he has 6 victories in the championship fights. After winning the belt at UFC 235, Usman has defended the belt 5 times already.

His opponent on August 20th will be Leon Edwards who is currently ranked no. 2 in the division. Similar to Usman, Leon is also on a long win streak. He has not tasted defeat since his last loss to Kamaru Usman in 2015. Edwards lost the fight via unanimous decision as the judges scored the fight 30-27, 29-28 and 29-28 for Usman.

As a matter of fact, Kamaru is only one of the two fighters to beat Leon inside the Octagon. How did the fight actually play out? Let’s find out.

Their first bout took place on December 19th of 2015, on ‘UFC on Fox: dos Anjos vs Cowboy 2.’ Kamaru Usman and Leon Edwards fought in the early prelims of the event. The early prelims also featured fighters like Francis Ngannou and Vicente Luque. It just goes to show how the landscape of the UFC has changed since then.

Usman faced Edwards in the second fight of his UFC career. At that time, Kamaru was not as skilful as he is right now. Back then, wrestling was his primary weapon and he used it to its full effect against Edwards the first time. The Nigerian Nightmare completely overwhelmed Leon with his dominant grappling game. He controlled Rocky for 10:40 minutes on the ground out of the scheduled 15 minutes.

In the 10 fights following his clash against Usman, Edwards has only been taken down 11 times and in his last 5 fights, Leon just conceded 1 takedown. So the British fighter has improved leaps and bounds on the ground. On the other hand, Usman has evolved as a fighter as well. So it will be interesting to see how the rematch plays out this time.