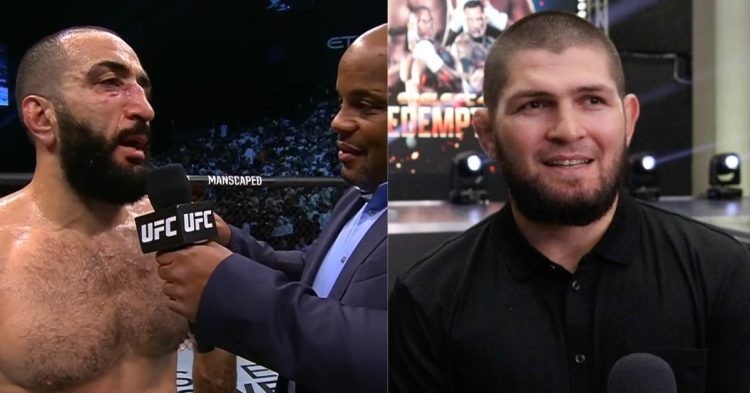 Belal Muhammad was in action as he took on Sean Brady in a three-round welterweight bout in the prelims of the UFC 280: Oliveira vs Makhachev PPV. Leading into this fight, Remember the Name was on the back of an impressive unanimous decision win over Vicente Luque.

Meanwhile, Sean Brady extended his undefeated MMA record to 15-0 with a big win over Michael Chiesa in his last bout. It is needless to say that this is a big fight for both the welterweights as a win would help them get one step closer to a title shot.

In what was expected to be a close contest between two exceptional grapplers, Belal Muhammad dominated the matchup from start to finish and handed Brady his first-ever professional MMA loss. This was Belal’s first stoppage win in the UFC and it came after he landed a whopping 1000 significant strikes.

Belal Muhammad (+125) just TKO’d the undefeated Sean Brady to close out the prelims at #UFC280😳pic.twitter.com/4GCKKBWNZc

Speaking about this matchup, early in the fight, Belal was struggling to land big strikes and create openings. Remember the Name also absorbed a lot of strikes and looked in trouble in the first round. However, Muhammad continued applying pressure on Brady and made a big comeback in the second round.

As the round progressed, Belal started landing big shots and hurt Brady with a lot of combinations. Thereafter there was no stopping Belal Muhammad as he piled up the shots and finished Sean Brady.

After ending Sean Brady’s undefeated streak by finishing him in the second round, Belal Muhammad spoke to Daniel Cormier in the post-fight interview. The American welterweight who trained under the guidance of Khabib Nurmagomedov for this fight reaped high praise on the former UFC champion.

Moreover, he gave full credit for his first stoppage win to Khabib and thanked the Eagle and his team for letting him train with them.

It is needless to say that Belal Muhammad took a big risk by accepting a fight against a lower-ranked opponent. But he continued his dominance and extended his winning streak to eight wins. With that being said, it would be interesting to see who Belal fights next.