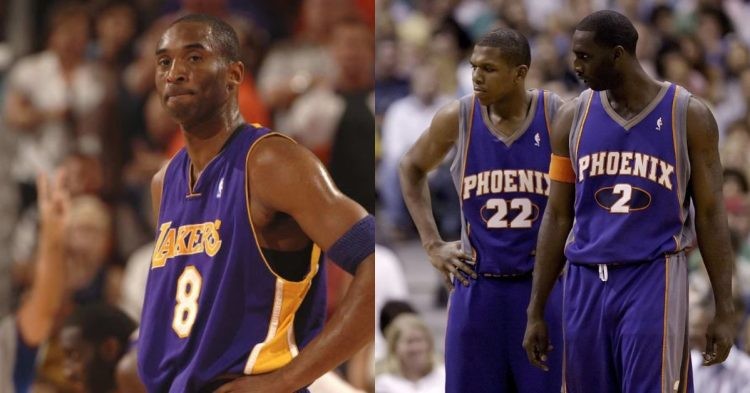 Kobe Bryant and the Suns (Credits: Twitter and Valley of the Suns )

Late Lakers legend Kobe Bryant was, throughout his career, an epitome of competitiveness and a never-quit attitude. There have been countless moments in The Black Mamba’s 20-year-old legendary NBA career that speak volumes about his fierce will and drive to win. His 5 NBA titles with the Los Angeles Lakers, only validate that notion.

However, one specific game in the 2006 NBA playoffs would go on to become a legacy-tarnishing game for Bryant. That night, the world saw the flip side of the competitive coin, as Bryant and Co lost a critical game 7 against the Phoenix Suns. In what could’ve been one of the greatest upsets in NBA Playoffs history, the Lakers instead crumbled, with Bryant leading the charge.

It was a first-round matchup in the 2006 NBA Playoffs between the Lakers and the Suns. The seventh-seeded Lakers were miraculously up 3-1 in the series before the No. 2 seed Suns won two in a row to force a Game 7 in Phoenix. Kobe had just scored a 50-piece in Game 6 on 20/35 shooting. Expectations ran high and fans were waiting to see Kobe repeat that performance and take home the victory.

By halftime, that seemed to be materializing as Kobe had already scored 23 points on an efficient 8-for-13 shooting from the field, even though his team was still down 60-45.

Kobe Bryant went cold in Game 7 against the Phoenix Suns

The second half was when it all went downhill. It is unclear to this day whether Kobe was following coach Phil Jackson’s advice of passing more or just trying to prove a point that his team needed his high-volume shot-taking, but Bryant suddenly decided not to shoot anymore. He took a mere three shots in the second half and scored just one point. The Lakers lost the game 121-90.

Game 7, first round, Kobe stopped shooting in the 2nd half, taking only 3 shots, & the lakers proceed to blow a 3-1 series lead to the Phoenix Suns.

Every tweet I see from you just makes you seem more & more unknowledgeable about the game & it’s history. pic.twitter.com/QU2qDgDFI6

Why you might think, did Kobe decide to get so passive all of a sudden? Various theories came up following the game. “To get back in the game, we needed somebody else to start making shots,” Bryant explained years later. “I was just trying to get the other guys going, turn the momentum around.”

But the media did not believe him, at all. TNT’s Charles Barkley laid it down on Bryant, calling him selfish and ranting so much that Bryant later had to appear on the show to defend himself. Bryant’s argument could not hold much ground, as the “guys” he referred to were players like Smush Parker and Kwame Brown, both heavy underperformers.

Responding to the allegations that he was trying to send a message to the front office, Bryant said, “Hell, no, that’s not my thought process. I don’t think like that. I think about one thing and one thing only, and that’s kicking butt.”

“If I’m going to send a message to the front office, I’m going to do it by going up there and raising hell,” he said. “There is no way I’m going to be doing it on the court, losing a game. That’s not who I am.”

The Lakers did eventually get rid of those guys after the following season, and Bryant did eventually lead a Shaq-less Lakers to an NBA title four years later, but that game 7 will still forever remain as a stain in his rich legacy.