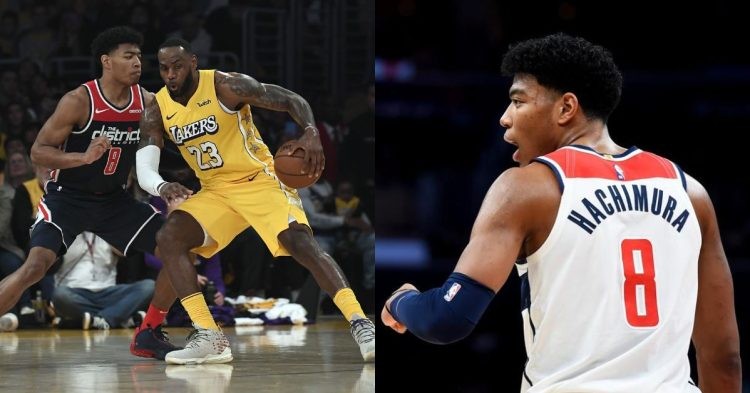 The Los Angeles Lakers have been rather laid back in making any trades in this trade window. However, the rumors can now be confirmed, that Rui Hachimura is now a Lakers man. The Lakers traded Hachimura for Kendrick Nunn, and 3 second-round picks to the Washington Wizards. The lakers have been dealt with numerous injuries and have banked on Hachimura.

It is a good deal for the Lakers, who have acquired him for a far lesser amount of money. LeBron is the man for the Lakers to get points on the board. Anthony Davis is another player who is crucial for the Lakers but is injured without a return timeline. Hachimura may be a lifeline as Hachimura has taken more threes than midrange shots. It should hypothetically increase the number of shots taken.

Where is the Lakers new forward, Rui Hachimura from?

Hachimura gained popularity when he was successful at the youth level in Japan. He is regarded as the best player in the under-17 and under-19 national categories when Japan played in the FIBA competitions. He made history by becoming the first-ever Japanese player to play in the NCAA Division I men’s tournament in 2017.

Many NBA fans are aware that Hachimura hails from Japan and spent most of his life there. His parents have played a crucial role in the player’s life. Hachimura is being playing in the States since 2016. the Japanese joined  Gonzaga University in 2016. However, Hachimura joined the Washinton Wizards as the 9th pick in the first round of the 2019 NBA Draft. He has spent almost 4 years in the capital with the Wizards.

🚨 BREAKING 🚨
The Washington Wizards have officially selected F Rui Hachimura out of Gonzaga University with the 9th overall pick in the 2019 NBA Draft pic.twitter.com/2JlRgXfszb

Rui’s Parents are both from different nationalities. His mother Makiko is from Japan, and it is where the basketball star was born in 1998. Hachimura is the name given by his mother’s side of the family, which translates to, “base” or ‘”fortress.” His father, however, is from Benin, an African nation with a population of less than 14 million. Not much is mentioned about his father and how he ended up meeting his mother in Japan.

As per Japanese law, most married couples all around, need to have the same surname. It seems that both the players’ names have been given by his mother’s side. Hachimura finished high school in Japan itself, and played for Meisei High School, winning three titles with his school. Rui is only the 2nd ever player to be drafted out of Japan after Yasutaka Okayama in 1981. He is the only Japanese player to be picked in the first round