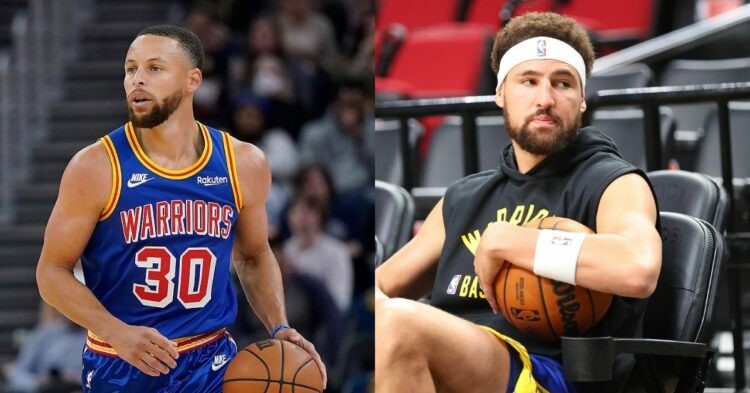 Stephen Curry and Klay Thompson also called “The Splash Bros“, are the greatest backcourt in NBA history. They have helped the Golden State Warriors win 3 championships. However, neither has an NBA Finals MVP.

Therefore, one must wonder which of these players has actually performed better in the NBA Finals. Most would argue that Stephen Curry is much better by far. However, do the stats really indicate the same?.

The Splash Bros have had many dominant runs throughout the years and several memories together. This makes it harder to choose amongst them.

Stephen Curry has outshone Klay Thompson in the NBA Finals

The majority is right in this case. There are very few who could present a case that Klay Thompson is better than Steph in the NBA Finals. Klay may specialize as a catch-and-shoot sniper. However, he has nowhere near Curry’s offensive arsenal.

The stats show that Stephen Curry has averaged 26.5 points, 6.2 assists, and 5.7 rebounds in 28 NBA Finals games. Additionally, he has also averaged 1.5 steals. These stats show Curry to be a dominant 25+ points per game scorer, even in the Finals.

Klay Thompson has averaged 18.8 points, 4.1 rebounds, and 1.9 assists in 27 NBA Finals games. The numbers speak for themselves. Klay specializes in scoring through relatively less ball usage. However, he is a worse rebounder and facilitator than Curry, by far in the NBA Finals.

This is not a knock on Klay Thompson. In fact, he may be one of the few players in the league with the shooting talent to rival Steph. Klay is extremely proficient as an elite scorer. There was a  game in 2016 when he scored 60 points in just 11 dribbles.

The NBA Finals is no random game in December. Therefore, it is unlikely Klay can go off on a scoring rampage. Thompson can match Curry only in terms of pure shooting. Curry has proven to be a better playmaker and ball handler than Thompson ever could.

Steph has had monster games when other star teammates like Klay and Durant have been out. This is another reason his stats look better in comparison to Thompson. However, these NBA Finals will give a  better picture as to who is the undisputed best player.