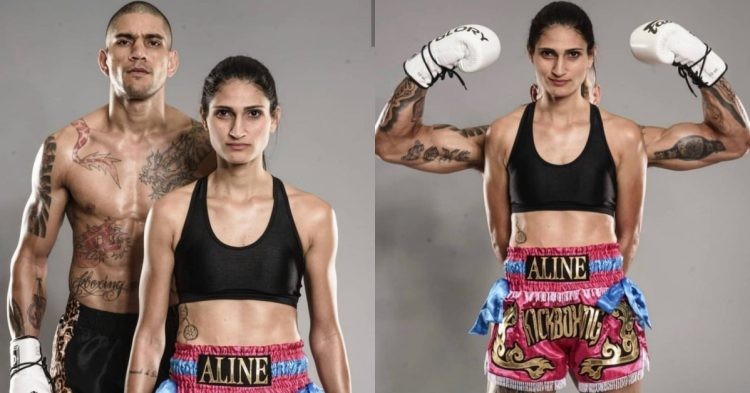 Aline Pereira, UFC middleweight title contender Alex Pereira‘s sister, is all set to embark on her new journey. She will follow in her brother’s footsteps and join Legacy Fighting Alliance (LFA). Alex fought in LFA one time in 2020 at LFA 95. He knocked out Thomas Powell in his only outing inside the LFA cage. He joined the UFC immediately afterwards.

Hence, his sister Aline Pereira would hope to replicate the same. In a statement, the MMA organisation announced her arrival and revealed when the fans can expect to see Aline in action. Fans will not have to wait terribly long as she is set to make her LFA debut on 18th November at LFA 147. She will face Helen Peralta, who previously appeared in the 30th season of The Ultimate Fighter earlier in the year.

The bout will take place at flyweight and it will be her MMA debut. Although Aline has some kickboxing experience, she has never fought in the MMA ruleset before. Her brother, Alex Pereira, lost his MMA debut against Quemuel Ottoni in 2015 via submission. So it will be interesting to see if she can avoid her brother’s mistake and begin her MMA career with a win.

What is Aline Pereira’s kickboxing record?

Her kickboxing debut came against Rayane Vieira at WGP Kickboxing in 2017. Aline Pereira won the fight via unanimous decision. Pereira followed it up with another UD win over Mayza Borges in her second fight. However, Aline faced her first professional loss in her third fight against Elaine Lopes. But Pereira bounced back with two more wins against Tatiana Campos and Nilcelia Pereira.

Just 2 years after her debut, Aline joined Glory kickboxing in 2019. She earned a crack at the Glory super bantamweight belt with two good wins. Unfortunately, she lost the title fight to Tiffany van Soest in January 2021. In her brief kickboxing career, Aline had only one KO finish, which came against Crystal Lawson at Glory 71 in 2019. Although her resume is not as glorious as Alex’s, Aline certainly has a respectable record.

Is Aline Pereira destined to join the UFC?

Aline Pereira is only beginning her MMA journey. However, fans are wondering if she can have the same success as her brother or not. Considering the fact that Alex Pereira got a title shot after just 3 fights in the UFC, it is a valid question. A lot will depend on how good Aline’s grappling is. Fans saw Alex stumble before for not having adequate grappling skills.

Pereira stands at 5’7, which is quite tall for the flyweight division. It will give her an advantage in terms of striking. She can use her reach to keep her opponents at the distance, which makes it hard to land anything meaningful against her. As her career progresses, Aline will face tougher challenges. If she can have constant success, her joining the UFC is inevitable.

“There’s Little Hope That He Will Change” – Kareem Abdul Jabbar Slams Kyrie Irving’s Apology, Says He Is Insulated by Fame and Money