Who Is Fedor Emelianenko’s Opponent for His Retirement Fight – Timothy Johnson? 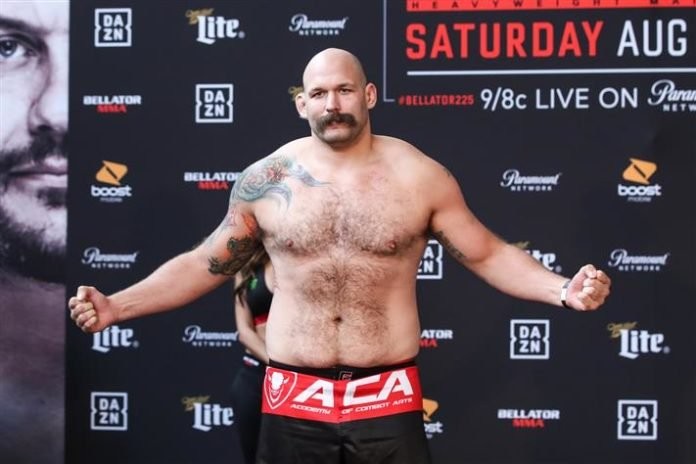 This weekend Bellator 269: Fedor vs. Johnson will be taking place at the VTB Arena in Moscow, Russia. In the main event, Bellator have placed a massive Heavyweight fight, where the former Bellator Heavyweight Grand Prix Finalist Fedor Emelianenko will be taking on Timothy Johnson.

Timothy Johnson is an American professional fighter. He has been competing in Mixed Martial Arts for the past 10 years. He currently competes in the Heavyweight division for the Bellator MMA. In the past Johnson has also competed for many promotions like Ultimate Fighting Championship(UFC), Dakota Fighting Championship, Beatdown and Max Fights.

After completing his collegiate career as a two-time All-American wrestler at Division II Minnesota State University Moorhead, Timothy Johnson made his professional mixed martial arts debut in October 2010. He competed primarily for regional organizations around his adopted home of North Dakota. He amassed a record of 7–1, finishing all of his opponents, before signing with the UFC on the back of a first round finish of Travis Wiuff in 2014.

Johnson (15-7) made his UFC debut against Shamil Abdurakhimov on April 4, 2015, at UFC Fight Night 63. He won the fight via TKO in the final seconds of the first round. Johnson’s UFC stint consisted of seven fights, out of which he won four fights and lost three.

After being released by the UFC, Johnson revealed that he had signed a multi-fight contract with Bellator MMA. Johnson made his promotion debut against Cheick Kongo on October 13, 2018, at Bellator 208. He lost the fight via knockout in the first round. Johnson last faced Valentin Moldavsky for the Bellator Interim Heavyweight World Championship at Bellator 261. He lost the bout via unanimous decision.

Timothy Johnson is happily married to his wife, Jessica Johnson. He shares one daughter with his lovely wife. However, he has not yet revealed when he and his wife exchanged the vows. He opted to keep his relationship with Jessica low-key.

The married couple are often seen posting photos and videos of themselves and their lovely daughter on social media. The name of Johnson’s daughter is Georgia Ann. It seems like the husband and wife duo share an inseparable relationship.

Overall, Timothy Johnson has a record of 15 wins and 7 losses in his professional Mixed Martial Arts career and as per reports, Timothy Johnson’s net worth from his fights throughout his career is somewhere around $1 Million – $5 Million.