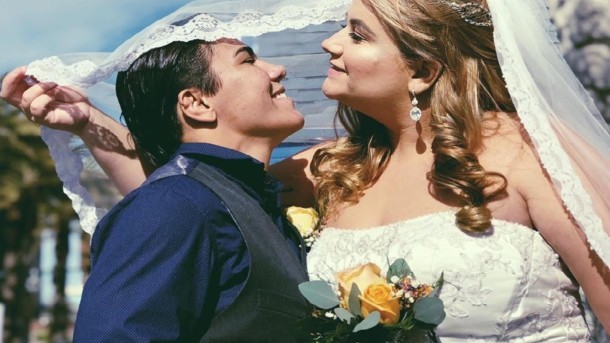 She quickly found success at her new division and after a three match win streak at the Strawweight Division she was given the opportunity to fight for the title against Joanna Jędrzejczyk at UFC 211.

Andrade lost the title match against Jędrzejczyk via unanimous decision. Although Andrade lost the match that night, but she won something worth more than a title i.e. a lifetime partner.

Who is Fernanda Gomes? – Wife of UFC fighter Jessica Andrade

After her defeat at UFC 211, Jessica Andrade was giving her in-ring interview to Joe Rogan when at the end she proposed to her long time girlfriend Fernanda Gomes.

Jessica Andrade has identified herself as a lesbian. She was in a long term relationship with her now wife Fernanda Gomes. The couple tied the knot in 2019 at a ceremony in Las Vegas. Currently the couple live in Brazil.

Andrade’s wife Fernanda Gomes is a biologist. Gomes also has interest in Jiu-Jitsu just like her partner Andrade, and it is known that she practices the art with her father and Andrade.

The couple currently don’t have any kids. Although, however in 2017 speaking to MMA Fighting the couple revealed their interest to have kids and start a family through artificial insemination. In 2019, the couple had faced a nasty experience of armed robbery. The couple had their phone and car stolen in the incident, but they both left unharmed.

Jessica Andrade had won her UFC Strawweight title by knocking out Rose Namajunas at UFC 237, but couldn’t defend her title against Zhang Weili. She would later go down the flyweight division, however, once again failed to get her hands on the UFC gold with a stoppage loss against Valentina Shevchenko.

Do you think Jessica Andrade will find success at the Flyweight Division ? Let us know in the comments section.