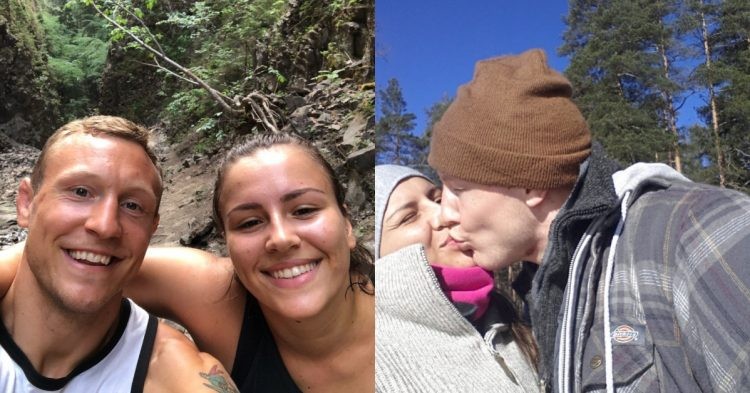 Jack Hermansson is a UFC middleweight fighter with 14 fights under his belt. He holds a record of 9-5 in the company. Although he was born in Sweden, Hermansson also holds Norwegian citizenship. He fightings out of Oslo, Norway and trains at Frontline Academy.

Hermansson has fought the best in the middleweight division since his debut in 2016. Although he has lost to the likes of Sean Strickland, Marvin Vettori, Jared Cannonier and Thiago Santos, The Joker also has beaten great fighters like Gerald Meerschaert and Ronaldo Souza and Kelvin Gastelum.

Although the fans are very aware of Hermansson’s credentials as a fighter, let’s take a look at his family and personal life.

During an interview with Ariel Helwani in 2019, Jack Hermansson revealed that he wanted to get married to his long-time girlfriend Nora Hartlov. He revealed that they have been together for almost 10 years now. He has also gotten a tattoo of her name on his arm.

However, 3 years have passed since then and it is yet to be known whether they eventually got married or not. It is also not clear if they have any children together or not. They are quite private about their love life. However, Jack has posted many pictures of him and Nora Hartlov together. After 10 years together, it seems like the couple is still going strong.

In 2018, Nora surprised him with a forest trip and it seemed like Jack absolutely loved the gesture from his partner. He posted pictures from that day on his Instagram and quoted it as the best birthday of his life.

Jack Hermansson’s family and his journey before MMA

Jack Hermansson was born on June 10th of 1988. He has a personal website where he detailed his life before becoming a Mixed Martial Arts (MMA) fighter in 2010. He revealed that he was born in Uddevalla, Sweden. He stated that he has five other siblings.

The 34-year-old tried out his luck in a lot of sports but it was wrestling that he fell madly in love with. In order to become a wrestler, he joined Uddevalla Atletklubb and worked on his craft for over 10 years there. But he also had to do a lot of odd jobs such as keeping a pet store and working as a bartender. Jack was also a substitute teacher for a while.

As far as his nationality is concerned, Jack lived in Sweden for the first 18 years of his life. But at 19, he decided to move to the capital of Norway, Oslo, for work. In his biography on his website, Jack stated that he has a love for both countries. While Sweden gave him the beautiful family that he has, Norway gave him a source of income. He also met Nora in Norway.