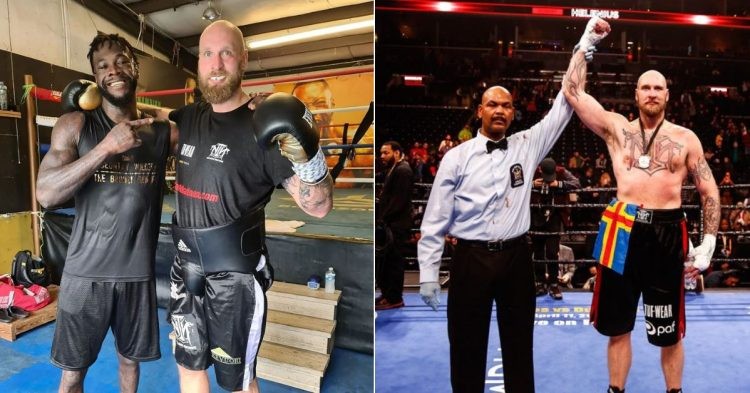 Deontay Wilder returns to the boxing ring after almost exactly a year to take on Robert Helenius in a twelve-round featured bout on October 15 live on FOX Pay-Per-View.

Wilder, who is a former WBC Heavyweight Champion will look to jump back into the title picture after dropping his WBC gold in a TKO loss against Tyson Fury back in February 2020. Wilder would go on to lose the trilogy fight which took place inside T-Mobile Arena in Las Vegas back in October of 2021. The bout against Robert Helenius will mark his return to boxing for the first time since his heated rivalry with the Gypsy King.

Needless to say, Robert Helenius is not a huge name in the world of boxing, and fans are eager to learn more about Wilder’s next opponent.

Helenius is a former European heavyweight champion and a silver medalist at the 2006 European Championship in his amateur career. He has held the WBA and WBO inter-continental heavyweight titles, having fought the likes of Dillian Whyte, Lamon Brewster, and Samuel Peter among others.

Helenius started his boxing training under the tutelage of his father at the tender age of 5. He won a bronze medal at the U17 European Championship and turned pro after failed attempt at making it to the Olympics.

Deontay Wilder will fight Robert Helenius in his boxing return

Fighting out of orthodox stance, Helenius is a power puncher and comes inside the boxing ring with experience behind his back. At 38 years of age, Helenius holds an impressive record of 31 wins and just 3 losses to his name. 20 out of those 31 wins have come via way of stoppage.

Standing at 6ft 6in with a reach of 79in, Helenius is a threat to any boxer in the heavyweight division and Deontay Wilder understands the threat Helenius brings inside the boxing ring. “Robert is just a great guy, someone I highly respect and I love as a man, as a human being.” Wilder has said about Robert Helenius in the lead-up to the fight.

Robert Helenius and Deontay Wilder are former sparring partners. Bronze Bomber believes that just the mere experience of sharing the ring with him during sparring will give Helenius a great amount of confidence come fight night.

Who do you think gets his hand raised come October 15 when Deontay Wilder takes on Robert Helenius in the main event? Will Wilder return to the winning ways, or is an upset underway? Only time will tell.