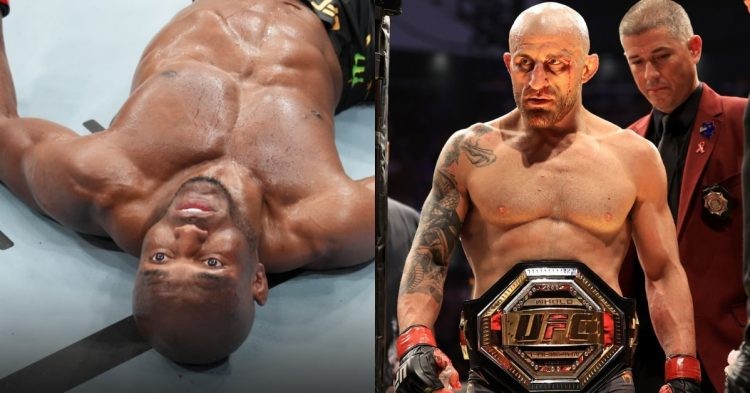 Alexander Volkanovski replaces Kamaru Usman in the pound-for-pound rankings of the UFC. The featherweight champion now occupies the no. 1 spot in the rankings. He dethrones Usman following the latter’s loss at UFC 278 against Leon Edwards.

Kamaru’s reign at the top comes to an end after a lengthy run as no. 1. The Nigerian Nightmare was an unstoppable force in the UFC prior to the last PPV. Since his debut in 2015, Usman has defeated quality opponents, one after another. He had beaten Tyron Woodley at UFC 235 and had 5 successive title defences.

Champs f$ck up sometimes… but we bounce back and come with vengeance!! 👊🏿🌍🤴🏿 #NGHTMR

He has beaten fighters like Colby Covington, Jorge Masvidal and Gilbert Burns. Kamaru was closing in on having the longest unbeaten streak in the UFC and the most number of title defences in the 170lbs division. Hence, he more than deserved to top the P4P rankings. Usman is currently ranked 4th on the list. But Volkanovski is a worthy successor.

Similar to Usman (before UFC 278), Alexander is also unbeaten in the UFC so far. In his 12 fights so far, Volkanovski has defeated future Hall of Famers like Max Holloway and Jose Aldo. The Aussie has 4 title defences till now and aiming to move upto lightweight to become a double champ. In his last outing, Alexander Volkanovski defeated Max at UFC 276.

As mentioned above, Kamaru Usman was the no. 1 pound-for-pound fighter in the UFC. Hence, beating him certainly warrants Leon Edwards a place in the rankings. After the biggest win of his career, Leon Edwards broke into the rankings at no. 6. He replaces the bantamweight champ, Aljamain Sterling, in the spot.

UFC middleweight champion Israel Adesanya is in the second spot. He defeated Jared Cannonier at UFC 276 and is booked to fight Alex Pereira at UFC 281. If Izzy beats Pereira, he will definitely have the chance to overtake Volkanovski in the no. 1 spot. He is followed by Charles Oliveira, Kamaru Usman and Francis Ngannou in the 3rd, 4th and 5th spots respectively.

The light heavyweight champion Jiri Prochazka is sitting at no. 10 while 125lbs champ Deiveson Figueiredo is one place ahead of him at 9th. Dustin Poirier and Aljamain Sterling occupy the rest of the spots in the Top 10 as they are ranked 8th and 7th respectively.

Jon Jones, who is rumoured to be returning at UFC 282, is ranked 12th in the division. Jones’ potential opponent Stipe Miocic is at 13th. The top 15 is rounded out by Max Holloway, Petr Yan and Brandon Moreno who are in 11th, 14th and 15th positions respectively.