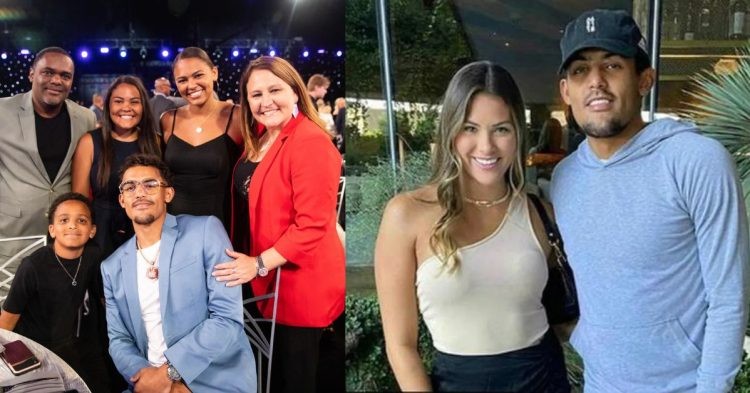 Trae Young is a star point guard playing for the Atlanta Hawks. He managed to carry them to the Eastern Conference Finals back in 2021. Additionally, he has a long shooting range compared to Stephen Curry’s or Damian Lillard’s ranges. Therefore, he can be considered one of the young upcoming stars in the NBA.

One must wonder about his personal life and relationships. After all, he is only 23 years old. It would interest people to know that several NBA players have children or get married and become complete family providers at a young age. It is essential to know what kinds of responsibilities motivate him.

Rayford Trae Young was born in Lubbock, Texas to Rayford Young II and Candice Young on 19th September 1998. Not many of Trae’s fans know that his father was also a basketball player. Rayford was a point guard for the Texas Tech University men’s basketball team. Additionally, he applied for the 2000 NBA draft but ended up being undrafted despite trying out for the Houston Rockets.

Rayford Young II did not give up on his basketball dream. He played internationally for several minor leagues in Portugal, Spain, Italy, and other European countries. This was the reason he was able to provide for his wife and child who lived with Trae’s grandparents.

Trae has three other siblings. He is an older brother to Tim Young. Moreover, he has two younger sisters and their names are Caitlyn and Camryn Young. Trae was very close to his grandfather, Rayford Young who passed away in 2009. This was several years before his grandson joined the league. The NBA star would have made his grandfather proud in a few years.

He also engaged to a woman named Shelby Miller. She was a cheerleader for Oklahoma University. They both reportedly met back in college and soon started dating.

Trae and Shelby welcomed their first child into the world in June 2022. Their son’s name is Tydus Reign Young. This means Trae will now have to bear the responsibility of being a father on top of all he already has on his plate. We are sure he will step up and be ready for this challenge.