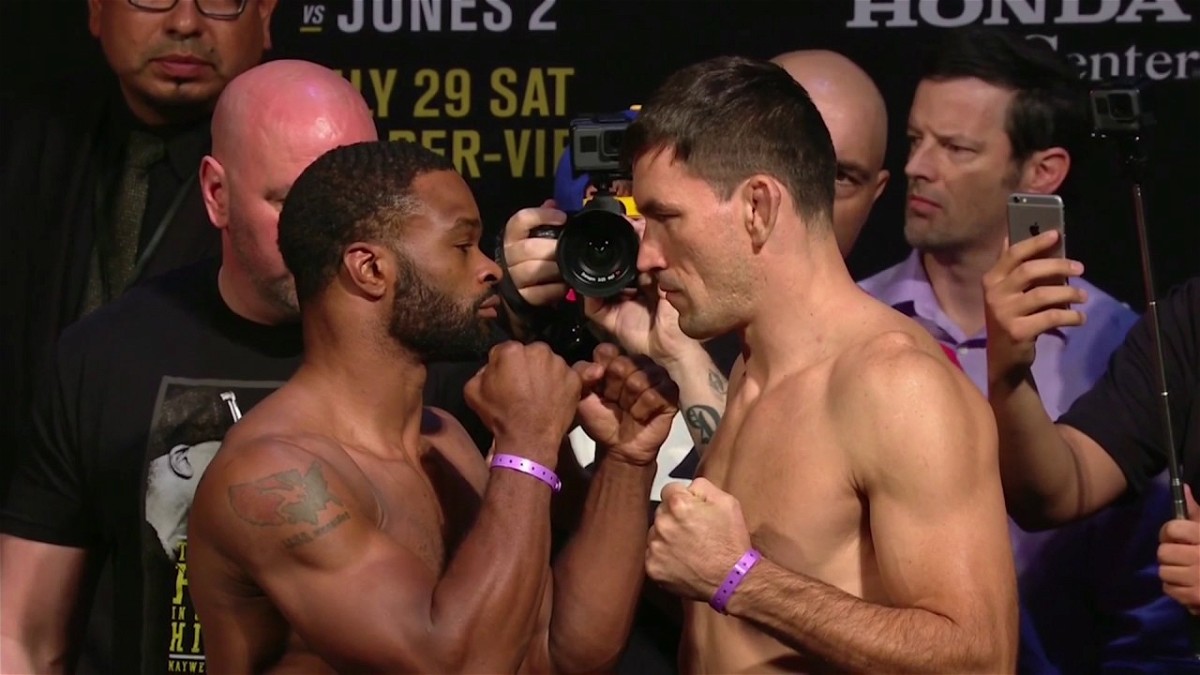 Woodley recovered from multiple injuries and made his anticipated return at UFC Fight Night: Woodley vs Burns. However, it did not turn out the way Woodley would have planned. Burns dominated Woodley and humbled the former Champion. He picked up an impeccable victory over Tyron Woodley and is currently ranked #1 in the UFC Welterweight rankings.

Burns was scheduled to face Kamaru Usman for the Welterweight Championship at UFC 251. However, the bout fell apart after Gilbert Burns tested positive for coronavirus disease.

While many expected Woodley to make a comeback against Colby Covington, it turned out to be an even bigger disappointment as “Chaos” dominated Woodley. Additionally, he became the first fighter to hand a stoppage loss to Woodley inside the UFC Octagon.

Also Read: How Did Tyron Woodley Injure His Rib Against Colby Covington?

While Tyron Woodley is currently competing in Titan games, in his bid to become an Ultimate Titan. Woodley has mentioned that he has more fight left in him, and is likely to make his return soon.

Tyron Woodley is currently ranked #5 in the UFC Welterweight rankings. He sits above Stephen Thomson, who picked up an impressive victory over Vicente Luque in his last fight. Jorge Masvidal is ranked #4 in the rankings. Masvidal failed to capture the Welterweight gold after a lackluster performance against Kamaru Usman at UFC 251.

It is unlikely that UFC will be interested in a trilogy bout between Stephen Thompson and Tyron Woodley considering Thompson is coming off a victory over Geoff Neal and could potentially fight someone from the top 5 of the division.

Thompson could be looking at a rematch against Jorge Masvidal. Masvidal expressed his desire to face Stephen Thompson in the lead-up to his fight against Kamaru Usman.

This leaves Demien Maia without an opponent alongside Tyron Woodley. Maia is currently ranked #7 in the UFC Welterweight rankings. Demian Maia was on a three-fight win streak before losing to Gilbert Burns via TKO in the first round.

Demian Maia and Tyron Woodley have faced each other in the past. Both the fighters locked horns at UFC 214. After big wins over Gunnar Nelson, Carlos Condit, and Jorge Masvidal, Damian Maia challenged Tyron Woodley for the UFC Welterweight Championship. Maia came into the fight with a seven-fight win streak relying mostly on his impeccable grappling skills.

However, Woodley shut the crowd after he dominated Maia for five straight rounds to defend the Welterweight gold. In the fight, Woodley successfully defended 24 take-down attempts from Demien Maia.

Both the fighters are coming off losses against Gilbert Burns. However, Woodley has been unable to impress fights fans for ten straight rounds now. It’s going to be a tough match-up for Tyron Woodley. Maia is still a threat on the ground, with two of his last three wins coming via submission.

It will be interesting if Tyron Woodley can defend Demian Maia if we consider his past few lackluster performances. It also brings back Demien Maia to the title picture, for many still believe that he can trouble a lot of the top 5 fighters in the division.

Tyron Woodley has fought fighters ranked lower than him in the past. Woodley took on Gilbert Burns when he was ranked #5 in the UFC Welterweight rankings, while he was ranked #1 in the division.

If UFC can make Tyron Woodley vs Demian Maia 2 happen, it’s certain to create anticipation among fight fans around the world. It will be interesting to see Woodley’s striking against a relatively weaker Maia, and his grappling against an equally brilliant Demian Maia.