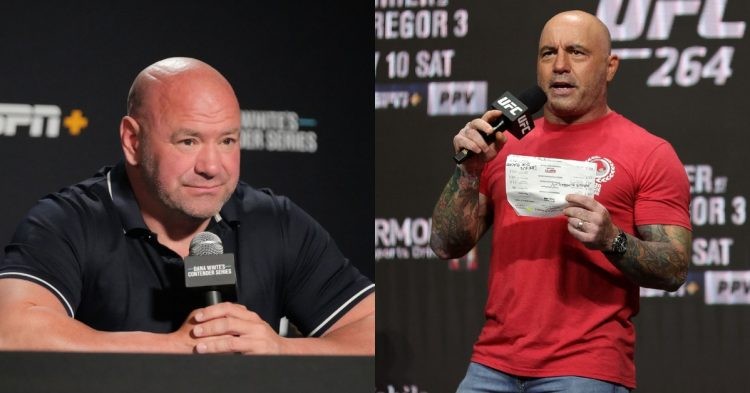 Dana White and Joe Rogan will be absent from UFC 275. (Images via Twitter)

Both UFC President Dana White and colour commentator Joe Rogan will miss UFC 275. The event is set to go down this weekend and it will be held in Singapore. Usually Dana White does not skip any Pay Per View (PPV) events. But he will make an exception for the upcoming event on Saturday.

In a recent appearance on the Spinnin Backfist MMA Show, Dana revealed that his son’s birthday will be that weekend. White’s elder son, Dana White the third will turn 21-years-old this weekend, Hence the father-son duo has big plans for the weekend as they plan on gambling in Las Vegas and then travel to Miami later to celebrate the occasion.

My Mom’s Basement is Robbie solo.

Although it is highly unusual, it is understandable that White wants to be with his son on the special occasion of his birthday. However, it is less surprising for Joe Rogan to sit out the PPV.

The 54-year-old does not usually travel abroad for the overseas PPVs anymore. With UFC 275 being held in Singapore, the announcement of Rogan sitting out the event was imminent.

According to a report from MMA Junkie, former UFC Middleweight Champion Michael Bisping is all set to replace him. Bisping also took Joe’s place at UFC 271 when Rogan took some time off amid the Spotify controversy.

The report also confirms that Bisping will be accompanied by Jon Anik and former two-division UFC champion Daniel Cormier. Megan Olivi will handle the duties of conducting backstage interviews for the live PPV event. Laura Sanko will also be handling media responsibilities this Saturday.

UFC 275 will feature two title fights in the main and the co-main event. The card will feature the UFC Light-Heavyweight Championship fight between Glover Teixeira and Jiri Prochazka in the headline.

The 42-year-old champ will defend his title for the first time against the 26-year-old Czech MMA sensation. Although Jiri is the favourite to win the bout due to his power and athletic prowess, the veteran will have a few tricks up his sleeves on the mat.

Valentina Shevchenko will have the 7th title defence in a row as she prepares to take on Taila Santos in the UFC women’s flyweight division. Valentina will be the clear favourite to dominate the Brazilian in the event. But the fans have witnessed a massive upset when Julianna Pena beat Amanda Nunes. Hence, The Bullet can not afford to take Santos lightly.

However, the most anticipated fight on the card will be between Joanna Jedrzejczyk and Zhang Weili. Their previous fight in 2018 is highly regarded as the greatest women’s Mixed Martial Arts (MMA) fight of all time.

Zhang Weili and @joannamma face off ahead of their highly-anticipated rematch at #UFC275 pic.twitter.com/DKsXrTDNm2

Weili will have a slight edge over Joanna as the Polish fighter has been inactive for 2 years now. Hence the ring-rust may affect the former champ in what is most likely to be a fast and furious contest.