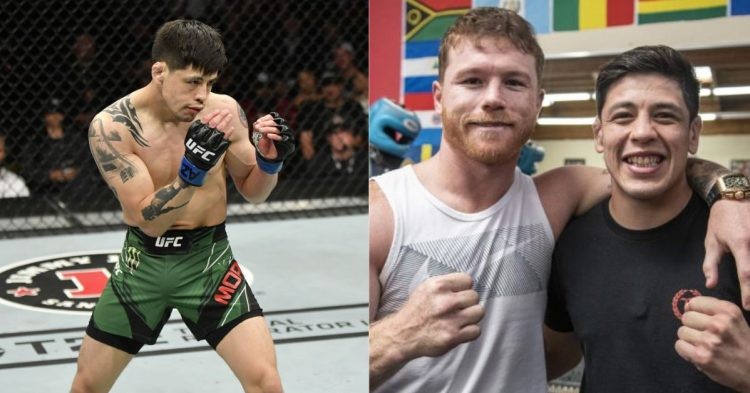 Brandon Moreno has emerged as one of the most popular fighters in the UFC. Moreno is the youngest Mexican UFC champion in the history of the sport and continues to take strides in his UFC journey.

Moreno has a charming personality. He is always smiling, and almost never engages in trash-talking ahead of his fights. He carries a calm demeanor, and his outlook on life is certainly inspiring. When you look at all these things, it’s hard for anyone to imagine that Brandon Moreno is also known by his nickname “The Assassin Baby”.

However, it wasn’t always like this. In yet another scary nickname, Brandon Moreno was earlier known by his nickname “Baby Assassin”.

Why is Brandon Moreno called The Assassin Baby?

Brandon Moreno is like an assassin inside the Octagon, willing to engage in a slugfest to get his hands raised against absolutely anybody. So it’s no wonder why he might name himself as such. Moreover, his appearance doesn’t give him an impression of a scary guy.

Moreno likes to play with Legos and is always seen humming and joking around with his fellow friends and fighters. The word “baby” hence makes a lot of sense. Before Brandon Moreno was called “The Assassin Baby” he was referred to as the “Baby Assassin”.

“I mean some guys thought, told me like, the Baby Assassin sounds like I am killing babies or something like that. That’s why I changed the words.” Moreno in a conversation with MMA Junkie.

When Brandon Moreno made his UFC debut, Daniel Cormier called him Mexican McLovin, a name that resembles a character from the movie, Superbad.

“I was just laughing about that. Daniel Cormier gave me that nickname, I remember when I debut in the UFC against Louis Smolka.

“He said that on TV and it was OK, fine, it sounds good and a lot of people on social media say that [Mexican McLovin].

“It’s funny, am actually Baby but that’s nice too.”

Mostly due to their resemblance, it’s hard not to mistake him for the American actor, Christopher Mintz-Plasse who played McLovin in the 2007 comedy “Superbad.” And it’s not just Daniel Cormier, and fight fans who think Moreno looks like McLovin, but even the Mexican star has admitted to the resemblance.

“After I get the title, I need to make some statements or call him on the microphone with Joe Rogan or something. You never know.” Moreno said.

In the past, Moreno has suggested he might call out the real-life McLovin inside the Octagon one day. What’s the best Brandon Moreno nickname in your opinion? The Baby Assassin or Mexican McLovin? Do let us know in the comments section.