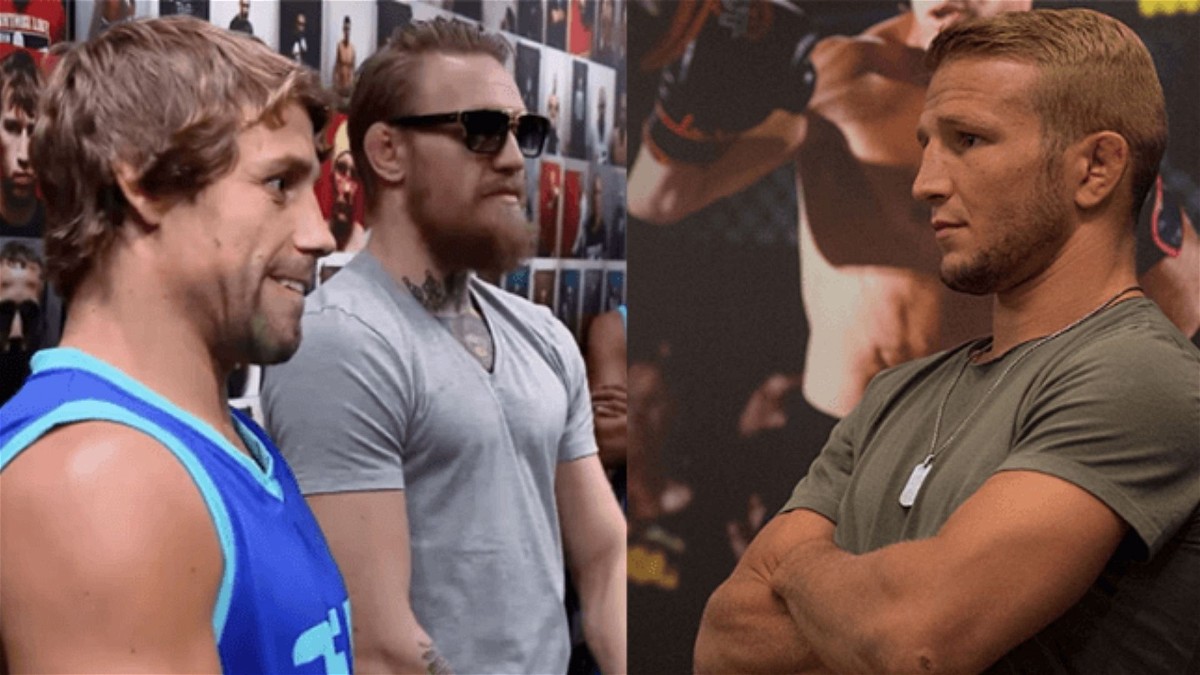 TJ Dillashaw and Conor McGregor share a bitter rivalry with each other and one that goes back to the very beginning of McGregor’s career as a mixed martial artist in the UFC. After winning the interim featherweight championship against Chad Mendes back at UFC 189, McGregor decided to be a part of UFC’s The Ultimate Fighter while waiting for his unification title bout against Jose Aldo.

Conor McGregor was joined by bantamweight legend Uriah Faber as the coach, with Faber’s teammate Ryan Hall winning the show. While McGregor’s trash-talk won the heart of many fight fans around the world, his relationship with Faber did not go unnoticed among fight fans.

Needless to say, Uriah Faber and Conor McGregor formed a friendship that continues to this day. It was partly due to McGregor’s regard for Uriah Faber that he decided to unleash a verbal onslaught on TJ Dillashaw and his “loyalty” to Uriah Faber.

Conor McGregor called TJ Dillashaw a snake in the grass after he expected Dillashaw to leave his longtime coach Uriah Faber and his Team Alpha Male, to join coach Duane Ludwig.

“You have never touched that belt in your life, always fell short. But the guy you brought up, touched it.” McGregor starts talking trash with the former bantamweight title challenger Uriah Faber, and later comments on TJ Dillashaw after a brief back and forth with Faber’s teammate at the Ultimate Fighter, Andre Fili.

“He is a little snake in the grass.” McGregor comments, talking about Dillashaw’s increasing closeness with coach Duane Ludwig. McGregor’s reaction was premature, considering TJ Dillashaw was still part of the Team Alpha Male at that time. However, everything would turn out to be true after Dillashaw would announce his departure from Team Alpha Male to join coach Ludwig, leaving his former coach and the guy who brought him up from high school, Uriah Faber.

“Ah, there’s the little snake in the grass right there. Hey, little boy. You lost? Where’s your mommy, little boy?”

“I’d like to congratulate you and your coach, Duane (Ludwig). Great win, man. Well done.”

While a back and forth between McGregor and Faber also prompted Cody Garbrandt, with the entire situation turning into a brawl, even the former bantamweight champion agreed that McGregor was right about calling TJ Dillashaw “a snake in the grass.”

Uriah Faber says there was no bad blood with Conor McGregor

“Conor and I, we’d have a good banter back and forth,” Faber said. “But we would have conversations, actual conversations all the time. So we’re standing in the gateway to go out to the fights, and that’s where they’d always put us together. He’s like ‘congratulations, we all watched T.J’s fight at the house, he’s so entertaining. And then Dwayne does this interview saying no one on Team Alpha Male wants to be a champion, the only one who wants to be a champion is T.J. Dillashaw.”

“So Conor — who understands about loyalty and things like that — goes ‘what’s up with Dwayne?’ … he got that little inkling that it was a sore subject and he just [rip at it]. So when T.J. got there, [McGregor] was all prepared just to needle him.”

Needless to say, most of the things that McGregor said turned out to be right, with McGregor taking a jibe at Dillashaw years later after he tested positive for EPO and was suspended for two years by the NEVADA state athletic commission. TJ Dillashaw ahead of his UFC return after two years against Cory Sandhagen expressed how McGregor made him the villain through that comment.

Additionally, Henry Cejudo coming out with a toy snake during the face-off against TJ Dillashaw ahead of the flyweight title bout just goes on to show how much the kind of impact that the comment “snake in the grass” has made over the years. So much that fight fans often continue to refer to Dillashaw with the same.

It won’t be wrong to say that McGregor was just trying to warn his good friend, Uriah Faber, asking him to see what was happening inside his team Alpha Male, and rightfully so, even Faber agrees that Dillashaw left the family that raised him.

Earlier, Faber had sent a heartfelt parting message to Dillashaw after he decided to leave Team Alpha Male, however, he would later cite his concerns and grievances with Dillashaw.

Also Read: “Conor McGregor Made Me the Biggest Villain”- TJ Dillashaw Looks Back at McGregor’s “Snake in the Grass” Comment