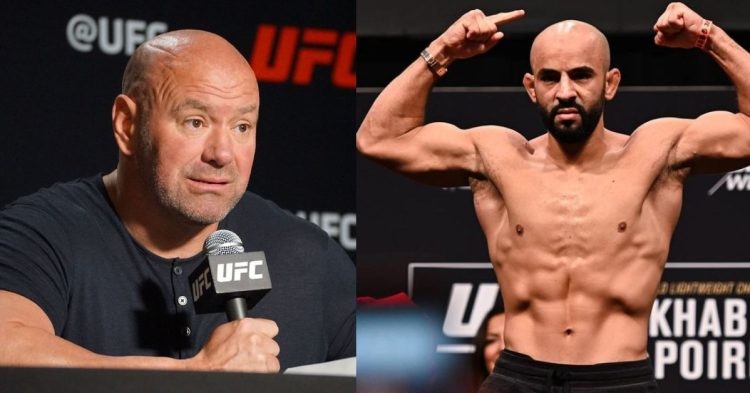 UFC lightweight Ottman Azaitar (13-0) will return to the octagon against Matt Frevola (9-3-1) at UFC 281 for the first time since his release from the promotion in 2020. Azatair was fired due to a violation of health and safety protocols during COVID-19.

UFC President Dana White announced in a press conference that Azaitar was fired ahead of UFC Fight Island in Abu Dhabi. White explained that the 32-year-old fighter and his team cut off their wristbands and gave them to someone outside of the UFC’s COVID bubble.

That unknown person made their way into the hotel and left a suspicious bag on their hotel balcony. When asked about that, Azaitar stated that he was not even aware of the incident but his manager claimed that there were potatoes in the bag.

Dana White explains why Ottman Azaitar has been cut from the UFC following a health and safety breach at #UFC257. pic.twitter.com/UO3aJbLUWO

Regardless, this bizarre incident cost Azaitar a big opportunity and now after two years, he will hope to get back into action again. Azaitar is undefeated in his pro MMA career and is coming off a stoppage win over Khama Worthy.

After the bag controversy, Ottman Azaitar was believed to have been involved in a doping incident. This in turn caused the USADA to keep a close eye on him. According to sources, Azaitar was tested 26 times following his release and was one of the most-tested athletes of 2021.

It was not disclosed what was in that bag, but it seems Azaitar was not involved with any kind of doping, as he never tested positive for any steroid. In an interview, the 32-year-old said: “USADA was listening to this whole trash, and then, ‘Oh, OK, this guy had something in this bag.’ I don’t know what they expect me to have in this bag.

I was worried that they think there was something dangerous, but they were thinking there were some forbidden substances and that’s why I was tested approximately 27 times last year. Very weird.”

Azaitar fought two times in the promotion and won both of the fights by stoppages. He beat Teemu Packalen by knockout at UFC 242 and Khama Worthy by TKO at UFC Fight Night in September 2020, before his release.

Azaitar was previously scheduled to face Matt Frevola at UFC 257, but after his release, he was replaced by Arman Tsarukyan. This fight has been rescheduled for the prelims of UFC 281, which takes place on 12th November, at Madison Square Garden.