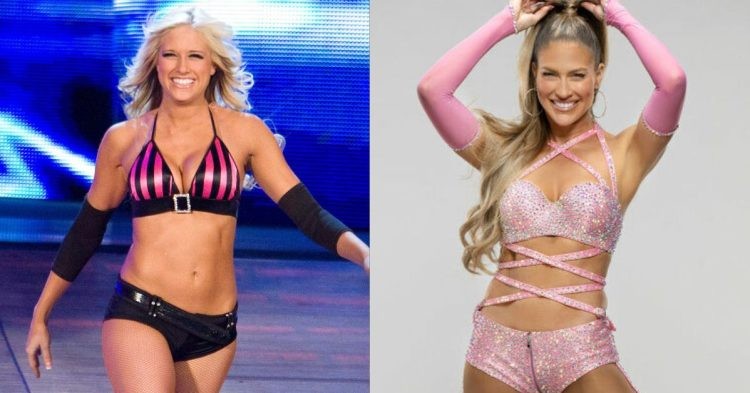 Kelly Kelly was among the company’s most notable female talents during the Divas Era. She was released by WWE in 2012 after winning the Divas title a year prior and wrapping up a six-year career with the company.

Born Barbara Jean Blank, she began her career as a model before entering the industry in 2006. She was only nineteen years old when she debuted on WWE in 2006 as part of Vince McMahon’s ECW brand, in which she was mainly used in non-wrestling roles.

Those close to the situation believed her term was nearing its end after she refused to sign a contract extension and demanded time off from the road, as reported by The Wrestling Observer. Company executives gave her time off with the expectation that she would return apparently. Those close to her claim she was seeking non-wrestling opportunities.

She was also a member of the crew of the E! reality series WAGS from 2015 to 2018, and she has tried acting in the years thereafter. She made her television debut as a waitress in an episode of Days of Our Lives. Her film debut was in the 2020 film Disturbing the Peace, where she played Amanda.

She appeared on WWE several times but returned to the squared circle as a surprise entrant in the Women’s Royal Rumble in 2022 making her third rumble appearance.

She married her boyfriend Joe Coba. The former WWE Diva’s Champion engaged to Joe Coba in June 2020. Coba is a fitness trainer, powerlifter, and bodybuilder. She announced it through her Instagram, along with photos from the event.

Joe Coba is a fitness expert and bodybuilder. He became well-known after having a relationship with WWE star Barbara Blank.

She was released from WWE in 2012. The reason for the release was later revealed to be her refusal to accept the long extension offered to her.

She was given time off by WWE in June, and she returned on Monday night Raw on August 6, beating Eve. She was dropped from her WWE contract on September 28, 2012. She revealed in a December 2012 interview that she needed time off to recover from a neck injury and wanted to model.

According to those close to her, she was looking for non-wrestling opportunities. Given her modeling background, it’s not surprising that she’s also now an Instagram celebrity and a fashion brand representative. She has worked with brands such as Fashion Nova, Reebok, and others.

She returned to the WWE as a surprise entrant in the Women’s Royal Rumble 2022.