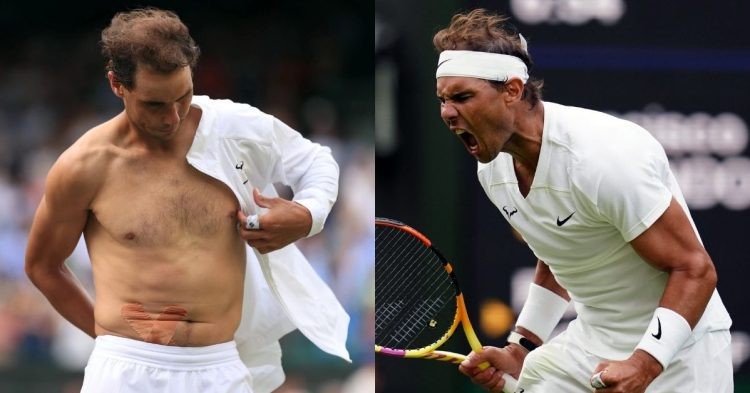 Rafael Nadal was one of the favorites to lift the Wimbledon trophy this year but that is not the case anymore. The Spaniard called a press conference ahead of his semifinal match against Nick Kyrgios to reveal that he won’t be moving forward in the tournament due to an abdominal injury.

During his quarterfinal match against Taylor Fritz, the two-time Wimbledon winner struggled to serve with power and precision. Fans even saw tapes on Nadal’s abdomen and were worried for him. Even with the injury, Nadal managed to win the match and made it to yet another grand slam semifinal.

Furthermore, Nadal said in his press conference, “Unfortunately as you can imagine I am here because I have to pull out from the tournament. As everyone saw yesterday I have been suffering with a pain in the abdominal and something was not OK there. That is confirmed, I have a tear in the muscle.”

After winning the first two grand slams of the year, Nadal was aiming for the calendar grand slam. However, pulling out of the tournament means he won’t be able to achieve that. Moreover, the Spaniard said, “I never thought about the calendar Slam, I thought about my diary [schedule] and my happiness.”

Nadal’s with withdrawal from the tournament essentially means Kyrgios will be heading to the final of Wimbledon without playing the semifinal match. Moreover, it also marks the first-ever grand slam final for Kyrgios and a chance at winning his first grand slam.

Playing against Kyrgios with an abdominal injury would have been really tough for Nadal. The 27-year-old Aussie is playing really well and beating him would have been an uphill task. Moreover, it would have only made Nadal’s injury worse, forcing him to stay away from the court for months.

Wishing you a speedy recovery.#Wimbledon

The 22-time grand slam winner said, “I make the decision because I don’t believe I can win two matches under the circumstances. It is not only I can’t serve at the right speed, it is I can’t do the normal movement to serve.”

Nick Kyrgios will face the winner of the second semifinal between Novak Djokovic and Cameron Norrie. Djokovic is the favorite to win the match and people can expect a Kyrgios-Djokovic final. However, does Kyrgios have what it takes to beat Djokovic and win the Wimbledon title?