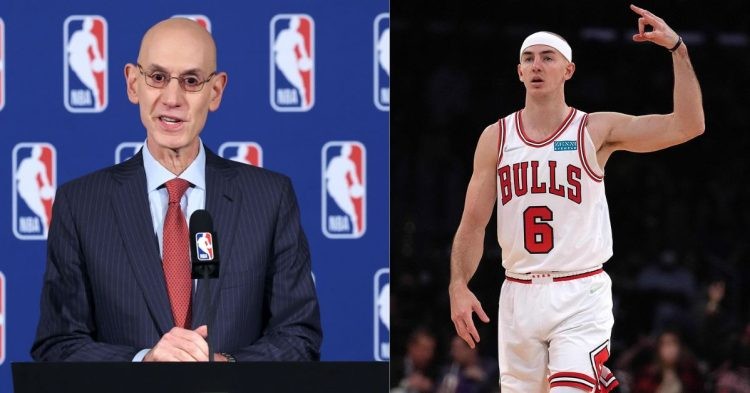 Alex Caruso is one of the role players playing for the Chicago Bulls in the NBA. He has been a decent role player for Chicago Bulls and his previous team, the Los Angeles Lakers. However, he has been a fan favorite among the basketball community since his Lakers’ days.

The main reason why fans adore Caruso is his inability to play well even after trying hard. Fans have even heartwarmingly dubbed him as the ‘GOAT.’ They have even ironically compared him to Michael Jordan when he shaved his head and joined the Bulls.

Recently, Alex Caruso expressed his wish to change his jersey number on Chicago Bulls’ Media Day. However, after the passing of NBA legend Bill Russell, the no. 6 jersey has been retired across the entire NBA. Coincidentally, Caruso wears the no. 6 for the Chicago Bulls.

Alex Caruso tried to change his #6 jersey number to honor the late Bill Russell but the NBA denied it because he’s top 75 in jersey sales (via @JCowleyHoops) pic.twitter.com/W2TPE2ymbj

Caruso wanted to change his jersey number but he mentioned the NBA rejected his bid to change it. He stated:

“I did give some thought to changing it this year, and the NBA told me I couldn’t because I was in the top 75 of jersey sales.”

Even though the league assured that players currently using the number would be allowed to keep it if they desired, Caruso wished to change it in Russell’s honor. He highly praised Russell in the conference stating, “Obviously (I) want to do nothing but honor him and his legacy and what he stood for.”

Alex Caruso tried to change his No. 6 jersey number to honor the late Bill Russell but the NBA wouldn’t let him because he’s top 75 in jersey sales.

“Obviously (I) want to do nothing but honor him and his legacy and what he stood for. He’s one of the pioneers — a racial advocate for the game of basketball in general and just an all around great person. I don’t know anybody that talks about him or knew him that had anything negative to say,” Caruso added.

According to numerous speculations, it’s safe to say Caruso is aiming for jersey number 4. This jersey number is the one he wore for the LA Lakers. Caruso wanted to change it to no.4 for the upcoming season.