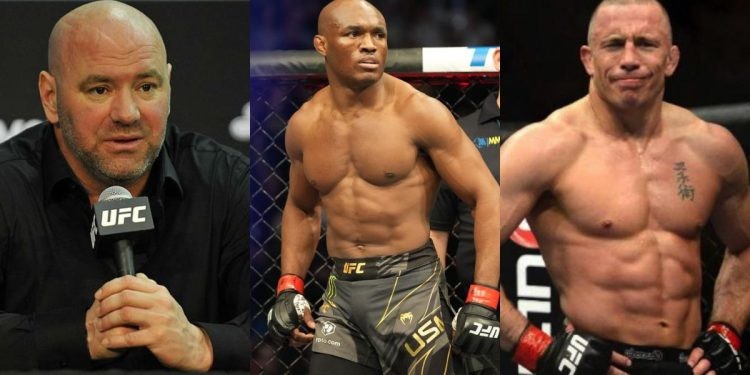 Dana White recently stirred up a controversy after claiming that Kamaru Usman is the greatest Welterweight of all time. Georges St-Pierre’s fans have taken this to heart and rightfully so, the UFC head honcho has put Usman over ‘GSP’.

During a recent interview with TheMacLife, Dana White heaped praise on Kamaru Usman. He claimed that the fact that Usman is lapping everybody in the division is enough to prove that he’s the greatest Welterweight ever. He said:

“It’s undeniable that Usman is the greatest welterweight ever. He’s lapping guys that are incredible fighters. This isn’t some lackluster division where you have Usman and everybody else, there are straight killers in this division.”

Even though Dana White has suggested that Kamaru Usman is the GOAT, he might just be horribly wrong. While Usman has certainly proven that he’s above the rest of the fighters in the Welterweight division, he has fought only three fighters in five title defenses so far.

It is also worth noting that GSP’ made nine title defenses in total whereas Kamaru Usman has only made five so far. Moreover, the Welterweight division was far more stacked with killers like Matt Hughes, Carlos Condit, and Jon Fitch. The fact that Georges St-Pierre mainly took on different opponents in his title reign suggests that he was more open to taking in new challenges every time he stepped foot inside the octagon.

As mentioned earlier, Kamaru Usman has made five title defenses so far. However, he is gearing up for his sixth title defense at the moment. ‘The Nigerian Nightmare’ is all set to take on Leon Edwards on August 21st at UFC 278. It is very important for Usman to get the victory come August 21st in order to get closer to Georges St-Pierre’s record of nine title defenses.

This rematch comes with much higher stakes 🏆@Usman84KG vs @Leon_EdwardsMMA

However, it remains to be seen whether Kamaru Usman decides to stay active for so long. As he is already 35-years-old and it won’t come as a surprise if he chooses to hang up his gloves before his ninth title defense. It will be interesting to see if Usman can match the record of ‘GSP’ and further cement his claim of being the Welterweight GOAT.