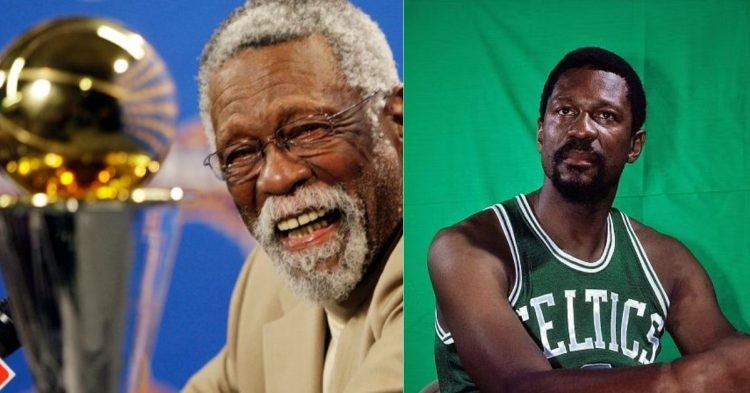 Bill Russell is one of the most accomplished NBA players ever. Not many modern-day fans are aware of who the Celtics legend was and how he played. He has been so successful that the NBA Finals MVP is named after him. It is referred to as the “Bill Russell NBA Finals Most Valuable Player Award“.

One must wonder what he has done to deserve this rare honor. We watch the NBA in its present era and there are very few people who watched 1960s basketball, who are here with us today. However, those were the roots of the sport and the NBA greats from then have made the way for NBA players today.

Bill Russell was an 11x NBA champion and 5x MVP. Additionally, he was also a 4x rebounding champion. There are few if any players with as many accolades to back a 13-year-long career in the league. He is the cornerstone of one of the greatest teams ever, the Boston Celtics. Thus, the 5 time MVP is a huge reason the Celtics have as thriving a fan base in present times.

Adam Silver is the present commissioner of the NBA. Before him, it was Commissioner David Stern, who is the man who decided Russell was deserving of this honor. The NBA Finals MVP trophy was renamed on 14th Feb 2009 to the “Bill Russell NBA Finals Most Valuable Player Award“. One would assume this is mostly because the Celtics champion was a great basketball player. However, there are other reasons that went into making this decision.

The 11x NBA champion was perhaps the most impactful African American athlete. We all know the growing issue of racism and inequality in the United States. Mr. Russell was one of the early pioneers of change. He grew up in as racially oppressive a background as one can imagine and has fought for change from the very beginning.

Not many fans will know that Bill Russell was the first African American coach for a North American pro sports team. Additionally, he helped the United States win in the Olympics and is a gold medalist. Being a voice of change earned him the Presidential Medal of Freedom in 2011. Thus, David Stern decided to bestow him with this rare honor.