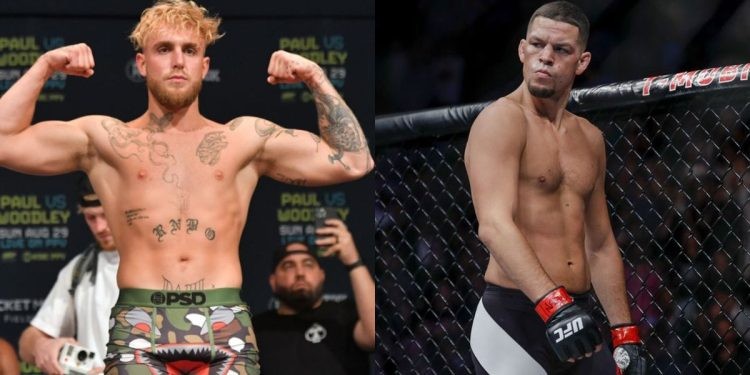 Jake Paul made his pro-boxing debut more than 2 years ago. Since then, he has attained an undefeated record of 5-0. However, in his undefeated run in boxing so far, Paul has failed to take on a “real boxer”. Moreover, it seems like ‘The Problem Child’ has taken a liking to MMA fighters as three of his five fights have been against them.

In fact, there have been talks of a potential matchup between UFC superstar Nate Diaz and Jake Paul. Interestingly, Diaz recently tweeted to call out the UFC to either release him or have him fight somebody in July or August while hinting at a fight with Paul.

Ufc release now please or give me fight with anyone in July or august
I have bigger shit to do pic.twitter.com/xyYSCBysLs

While Nate Diaz is undoubtedly much more used to performing under the bright lights than Jake Paul, it is hard to imagine him giving the 25-year-old a hard time inside the ring. ‘The Problem Child’ has a lot of things in his favor for a potential matchup against the UFC veteran.

There is a vast weight difference between the two and Diaz will have to fight over his usual weight. Moreover, the 25-year-old is 12 years younger than the Stockton native.

It is also worth noting that Nate Diaz is past his prime. So, it is safe to say that Diaz will not thrive with the boxing gloves on especially against Jake Paul who has shown massive improvements in his boxing abilities over the last few years.

Dana White has been regularly brought into the mix when there is a potential matchup between a UFC superstar and Jake Paul. While some have suggested that he might be interested to hop on and promote in the same way he did for Conor McGregor and Floyd Mayweather, the possibility of that happening is very less.

Dana White got involved with McGregor vs. Mayweather because of how monumental the event was going to be. It is hard to imagine a similar buzz to a Jake Paul vs. Nate Diaz event and because of the same, it is very unlikely that the UFC boss will be down to promote the event if it happens in the future.

However, he has backed Diaz to fight Paul during a recent interview with TheMacLife suggesting that it is the fight to make.