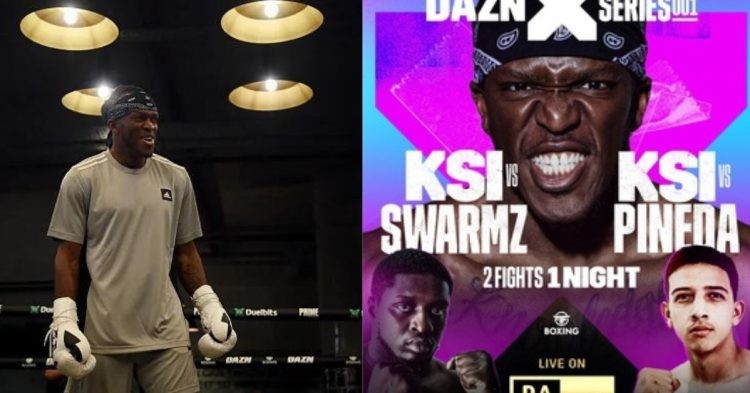 Popular YouTuber-turned-boxer and recording artist KSI will return to boxing after 3 years at the O2 Arena in London on August 27. KSI will have his first outing since his win over Logan Paul in 2019.

The 29-year-old will face not one, but two opponents in one night, one of them being a professional boxer. This is to give himself the toughest test to date as no other boxer has ever done it.

To achieve a feat that no other influencer boxer has ever attempted, the Brit has taken the challenge. KSI’s manager also stated that this crossover fight is sanctioned by THE PBA and there will be 10 oz gloves and no headgear.

‘The Nightmare’ is set to face Swarmz, a former footballer turned rapper. If KSI beats him, then he will proceed to the main event to face Mexican professional boxer Luis Alcatraz Pineda in a three-round bout under pro boxing rules. Speaking about this unprecedented decision, KSI said:

“Honestly, I felt like me just fighting Swarmz wasn’t enough. I’m pushing myself to the limit and seeing what I can do, seeing how far I can go.”

This rare boxing card featuring KSI going up against two men in one night will be broadcasted on DAZN PPV on August 27 at the O2 Arena in London, England.

KSI was originally scheduled to fight Alex Wassabi but the bout was cancelled as Alex pulled out after an injury. The British Youtuber-turned-boxer then announced that the rapper Swarmz would replace his former opponent.

However, KSI felt that that was not enough. To prove a point, he confirmed a second match-up of the night against pro Bulgarian fighter Ivan Nikolov, who has a record of 3-16.

However, as per the report, Ivan was removed from the card after he was found to have ‘neo-Nazi tattoos’ and ‘white supremacist beliefs’. The Bulgarian was replaced by Pinada who has a better record and wins over Pablo Poom Leal and Jose Adolfo Caro in his professional career.

KSI is confident that he will win his first fight with Swarmz. He stated: “With Swarmz it’s going to be either a knockout or TKO. I think the referee is going to save him.”

The ongoing attention that the Youtuber-turned-boxer Jake Paul has managed to draw is also another reason behind KSI’s comeback.

In a recent interview, KSI explained that he has returned to boxing with a “main goal” to beat Jake Paul. He said:

“I want to f*** him up, essentially. But to do that I need to be constantly testing myself, pushing myself, and seeing how far I can go.”

But before that KSI will have to make a successful comeback this Saturday, 27th Aug. If KSI manages to beat two opponents in this upcoming event, it will be the biggest achievement in his boxing career.