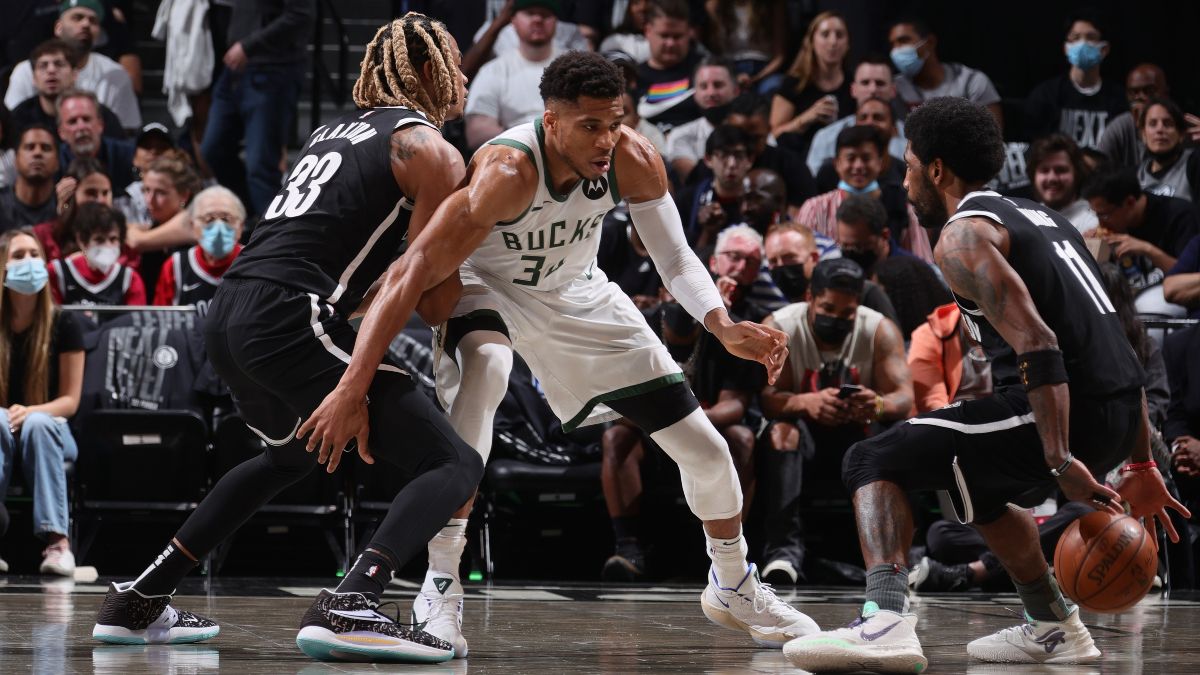 Game 2 of the Eastern Conference semifinals commenced between the Brooklyn Nets and the Milwaukee Bucks.  James Harden aggravated his right leg hamstring within the first few minutes of game 1 and sat out the rest of game 1. The Brooklyn Nets dominated at home and won the game 115-107. The Milwaukee Bucks headed into game 2 hoping to change the momentum of the series. The Bucks had come off an awful three-point shooting night in game 1 shooting only 6 of 30 threes as a team. A repeat of this performance was not expected going into game 2.

Game 2 was all about the Brooklyn Nets as they handed the Milwaukee Bucks their worst loss in this postseason. Kevin Durant and Kyrie Irving were simply spectacular in this game. The Brooklyn Nets ended game 2  with a dominating 125-86 win. The series now heads to Milwaukee for Games 3 and 4. Giannis and the Bucks have this small window to narrow the gap and make this a competitive series. Several variables went awry with the Bucks in game 2.

Also Read :Why Are There Mixed Views on Lebron James for the Greatest Basketball Player on the Planet Today

The ability to knock down free throws is crucial in close games. The bigger the player it seems the harder it for him to make his free throws. The Greek Freak is no exception. In this game, he shot an awful 2 of 7 from the free-throw line. This is only 28.6 %. Shaq was a  career 52.7% free throw shooter. This is just to put things in perspective. Giannis’s form seems different. He practices his motion repeatedly, especially after a miss. He takes a long time to even release the free throw. As Giannis is an otherworldly force in the interior, fouling him and making him shoot the free throws ensures that he underperforms in his overall scoring.

Khris Middleton and Milwaukee Bucks cooled down as the Brooklyn Nets went off.

All-star Khris Middleton had one of the worst stretches of his basketball career. This was when the Milwaukee Bucks needed him the most. Middleton ended the game with 17 points and 5 rebounds. However, he did not score a single point during the first half of the game. As Middleton had only begun making shots with 3 minutes remaining in the 2nd quarter, one could argue the Nets had already put the game away by then. The Nets dominated the Bucks and outscored them 36-19 in the first quarter. They also outscored the Bucks in every quarter of the game. Landry Shammot, Bruce Brown, and Nix Claxton played extremely good defense and contained the Bucks in the first half. Contribution from the role players and an efficient night for Durant and Irving allowed the Nets to steamroll their opponents in game 2.

The Bucks play in the paint better than the Nets. However, the Nets are just too offensively efficient. The only way the Bucks can beat the Nets is if the Bucks can have a good shooting night while playing excellent defense. The Bucks only shot 8 of 27 three-pointers ( 29.6%), while the Nets shot a whooping 21-42 three-pointers( 50%). The gap in shooting performance alone indicates why this game seemed so one-sided. To make matters worse for the Bucks. They had twice as many team turnovers as the Nets with 16 turnovers. Both these stats are the primary reasons why the Bucks lost by such a large margin despite outrebounding the Brooklyn Nets. This awful three-point shooting to turnover ratio proved fatal against an offensive team like the Nets.

What Next for the Bucks?

The Milwaukee Bucks are in a grim situation. They are down 2-0 heading back home. If they lose a single game at home they will fall into a 3-1 deficit heading back to Brooklyn. The Bucks need to dominate game 3 in Milwaukee. They must shoot better as a team and contain Brooklyn. I personally believe they must win by at least 7 points or make it a 3 possession game. Anything less than this won’t allow them to take momentum and pressure the Nets for Game 4.