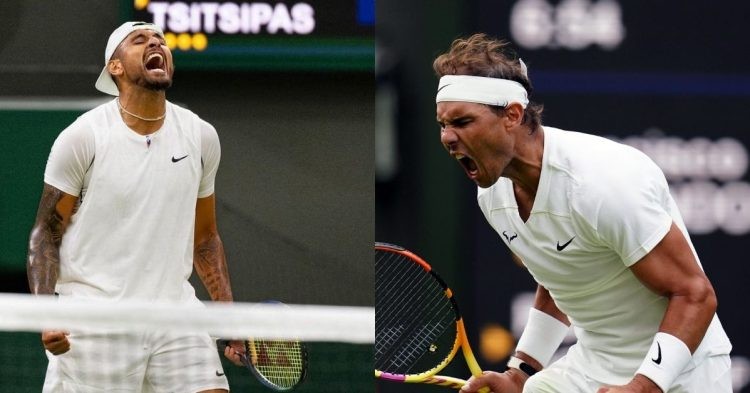 Nick Kyrgios and Rafael Nadal won their respective quarterfinal matches at Wimbledon to set up a mouth-watering semifinal clash. There is no doubt that the Center Court will be packed for this semifinal. Nadal and Kyrgios have been bitter rivals on the court and that is why the semifinal is even more exciting.

After his quarterfinal win, Kyrgios was asked about his semifinal clash against Nadal. Even though the two have had altercations with each other in the past, Kyrgios feels it would be special to play Nadal.

Moreover, he said, “Yeah, obviously it would be pretty special to play Rafa here. We’ve had some absolute battles on that Centre Court. He’s won one against me, and I’ve won one against him.”

Kyrgios is pretty certain that his semifinal match against Nadal might clock the most views in the history of tennis. He said, “I feel like that would be a mouth-watering kind of encounter for everyone around the world. That would probably be the most-watched match of all time. I would argue that.”

Kyrgios is the kind of player that does not take his rivalry outside the court. He switches on his competitive side only on the court. Despite his controversies with Nadal, he said he has a lot of respect for Nadal. In fact, he has said multiple times that the Spaniard is the greatest in tennis history.

Furthermore, Kyrgios said, “Obviously, we know we are two completely different personalities. I feel like we respect the hell out of each other, though.” The Aussie has played Nadal nine times in his career. Out of the nine matches, Nadal has won six and Kyrgios has won three.

In the past five matches, Nadal has completely dominated Kyrgios and won four matches. While Nadal is the favorite to win the match, Kyrgios is looking in fine form. Moreover, Nadal is also battling an abdomen and foot injury and Kyrgios has a real chance to beat his opponent.