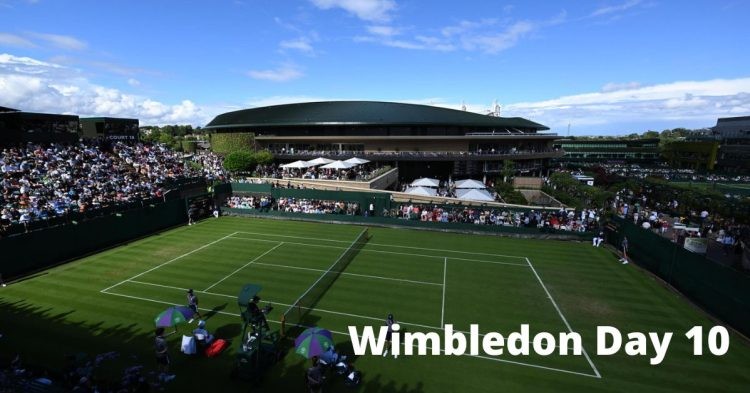 The tenth day of Wimbledon will also be the second and final day of the quarterfinal. Players like Nadal and Kyrgios will fight hard to book a place in the semifinal. On the other hand, Simona Halep will be the player to watch in women’s singles. Here is a look at all the matches and predictions.

Taylor Fritz has played some amazing tennis so far. He has justified why he is seeded 11th in the tournament. However, he has a mammoth task ahead of him as he faces Rafael Nadal in the quarterfinal.

Rafa Nadal practicing on Court 16 ahead of Wimbledon QFs vs Taylor Fritz!

Nadal’s game has improved with every match and is looking in formidable form at the moment. It is fair to say that everyone is expecting him to win considering how well he has played this year.

Cristian Garin made one of the biggest comebacks of Wimbledon 2022 when he beat Alex de Minaur in the quarterfinal. He lost the first two sets but fought back to win the next three sets.

Nick Kyrgios is through to the Wimbledon quarter-finals after a five-set win over Brandon Nakashima. He now meets Cristian Garín in the last eight https://t.co/bEMXCKOxRZ pic.twitter.com/V5SS42QuP7

Nick Kyrgios also played a five-set match in the quarterfinal and had some trouble with his shoulder during the match. If he is able to overcome his shoulder problem, Kyrgios is the favorite to win the match and set up a potential semifinal against Nadal.

Simona Halep and Amanda Anisimova will come face-to-face for a mouth-watering quarterfinal clash. Halep is seeded 16th while Anisimova is seeded 20th.

For Simona Halep, back on Centre Court for the first time since she won the title so brilliantly in 2019, her 6-1, 6-2 demolition of No 4 seed, Paula Badosa, was a timely reminder of just how good she is.

Even if you keep the seeds aside, Halep is expected to dominate against Anisimova. She has been playing on another level and has not dropped a single set till now. She has won the Wimbledon title in the past and people are expecting nothing less from her.

Both Elena Rybakina and Ajla Tomljanovic have surprised the experts and tennis fans with their play so far. No one expected the two to come this far in Wimbledon this year.

Rybakina has won all her matches without dropping a set. However, she has not faced tough opponents in the tournament till now. On the other hand, Tomljanovic has played some tough opponents on her way to the quarterfinal. While the match-up looks pretty equal, out bet is on Rybakina.