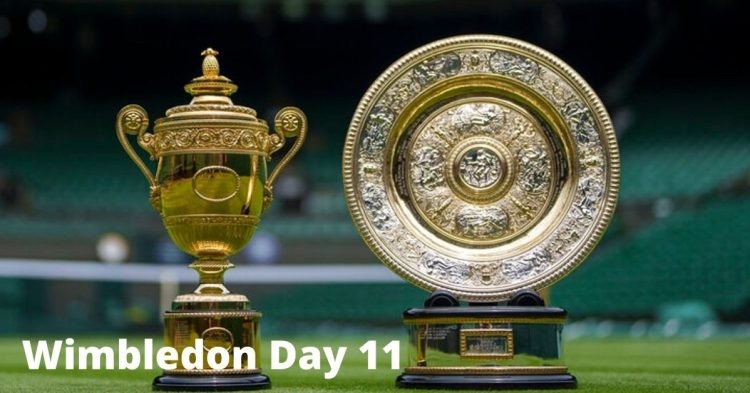 With each passing day, we are getting closer and closer to the finals of Wimbledon. Both men’s and women’s singles have given tennis fans some exciting matches and upsets. Day 11 of Wimbledon will see only matches from women’s singles.

Ons Jabeur, Tatjana Maria, Simona Halep and Elena Rybakina will fight it out to make it to the final. Jabeur will take on Maria in the first semifinal while Rybakina will later play Halep in the second semifinal. Tennis fans can expect some nail-biting rallies and some tight matches.

Ons Jabeur dropped her set for the first time against Bouzkova in the quarterfinal. However, she unleashed her true self after that to roll over Bouzkova and booked a seat in the semifinal. On the other hand, Tatjana Maria has played some inspiring matches against tough opponents on her way to the semifinal.

Considering Jabeur’s dominance and Maria’s fighting spirit, the match can swing either way. However, Jabeur holds a better chance against her opponent. She is more fit and agile and Maria has a tough task ahead of her.

Halep and Rybakina are seeded 16th and 17th in this year’s Wimbledon. Therefore, fans can expect a tough match between the two. Both the players are hitting the ball well. Making it to the semifinal shows how well they have played till now at Wimbledon.

2019 Champion Simona Halep advances to the #Wimbledon semifinals without the loss of a set. Extends her win streak at the Championships to 12 matches and 21 consecutive sets.

Will face Elena Rybakina, who advanced to her 1st major semifinal with a comeback win over Tomljanovic.

However, Halep has way more experience than her opponent and has even won the prestigious title in 2019. She is the only player who has not dropped a set till now. It only proves that Halep has been dominating against all her opponents.

Rybakina also had not dropped a single set until her quarterfinal match. However, she won the next two sets to make it to her first-ever grand slam semifinal. There is no denying the fact that Rybakina is playing well but Halep is the clear favorite in this semifinal clash.