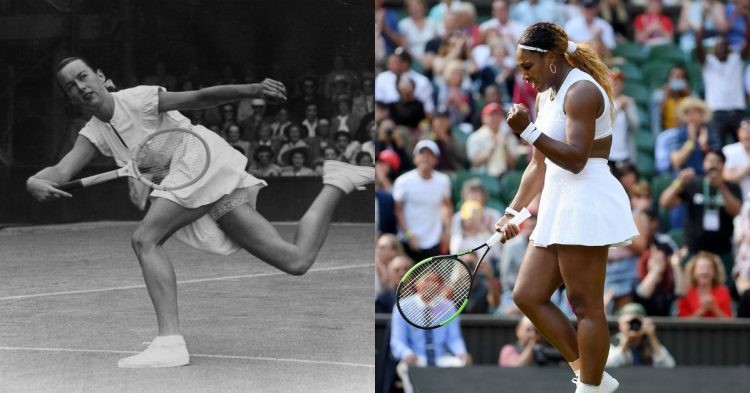 Wimbledon White Dress Code- Then and Now (Credit: Time and Us Weekly)

Wimbledon, as we all know has one of the oldest traditions in the history of any sport. There is a strict white clothes policy that dates back to the 1800s. While the tradition makes it one of the most unique tournaments, there have been talks about showing some leniency for women.

The white dress code is so strict that players cannot even wear white shoes with colored soles. Moreover, women have to wear white underpants underneath their white tennis clothes. However, this is where the debate for change starts.

Wimbledon prides itself on its all-white dress code – conceived in the 1800s to minimise sweat stains on coloured clothing – which sets it apart from the other Grand Slams.

➡️ Until now no female player has publicly questioned the practicality of whites around menstruation pic.twitter.com/iC5jnXdTV2

For a woman playing during her periods, there is always the fear of menstrual blood showing on her skirt or underpants. It is already tough to play during periods and women have this added problem while playing probably the most important match of their careers.

Such real and genuine problems have been sidelined to continue with an old tradition. It is true that Wimbledon draws a lot of its charm due to its white uniform policy. However, the rule can be tweaked for the better. Women can wear dark-colored underpants or skirts with their white clothes.

Catherine Whitaker, a British sports reporter recently raised the issue of white uniform for women at Wimbledon. In an interview with Telegraph, she said, “I cannot imagine going into the biggest day of my life, with my period, and being forced to wear white.”

Former tennis player and Olympic champion, Monica Puig also commented on the issue and called for a change in rule. Furthermore, Puig said, “Not to mention the mental stress of having to wear all white at Wimbledon and praying not to have your period during those two weeks.”

Wimbledon’s all-white clothing rule is outdated. It negatively impacts females due to menstruation. Plus the limited bathroom breaks can also hurt those with medical conditions. #Tennis #Wimbledon https://t.co/R09Vo7z6jp

The uniform is not the only issue. As per the rules, players can leave the court for bathroom breaks only twice. It only highlights that no consideration is given to periods during the tournament. Women have conversations about taking the pill in order to avoid periods during the time of Wimbledon.

Is it time for the world’s oldest tournament to loosen its grip on its oldest tradition? It is high time for officials to discuss the possibility of going easy on its white uniform policy.