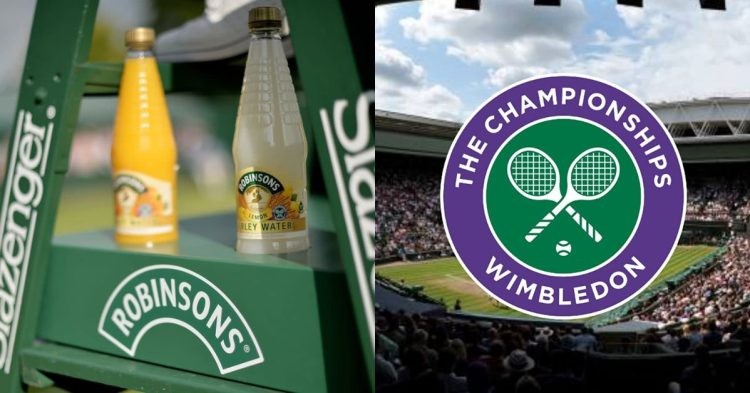 Squash brand Robinsons and Wimbledon have decided to end their 86-year-old partnership. It was one of the longest partnerships in the history of any sport. Robinsons’ association with Wimbledon started in 1935. At that time, the drink consisted of only barley, lemon juice, and sugar.

Soon the company started producing the drink commercially and its bottles started appearing on the stairs of the umpires. There is only one other partnership in tennis that surpasses this one.

Slazenger and Wimbledon share a 120-year-old partnership with the former being the official supplier for the tournament.

Robinsons announced the end of the historic partnership through Twitter. Moreover, the tweet read, “Robinsons is no longer sponsoring Wimbledon fortnight and this year will be celebrating the whole of summer with The Big Fruit Hunt – an interactive opportunity to find virtual fruit and win real prizes.”

Why did the partnership between Robinsons and Wimbledon come to an end?

Many must be wondering what triggered the end of this long-standing relationship. As per rumors, Robinsons’ parent company Britvic wanted to promote some other products like Gatorade, Pepsi Max, Rockstar Energy, etc. However, the All England Lawn Tennis Club (AELTC) did not come on board with that plan.

Can confirm Robinsons has ended its 80-year-plus association with #Wimbledon. Understand owner Britvic wanted to expand deal to include other brands in its portfolio, but AELTC uncomfortable associating with other sugary drinks. Juicy story (£) https://t.co/Z8lnjgfYrK

Wimbledon is known for being selective with its sponsorship deals. The tournament is careful about promoting products in a socially responsible manner. That is probably why it was against promoting sugary drinks like Gatorade and Pepsi Max. On the other hand, Robinsons had removed sugar from its drinks in 2015.

After the end of the partnership, AELTC also released a statement. Apart from announcing the end of the partnership, it thanked Robinson for its support over the year. Moreover, AELTC said, “We are tremendously proud of the historic association with Robinsons over so many years, and thank them for the wider role they have played in supporting Wimbledon and tennis across the UK.”