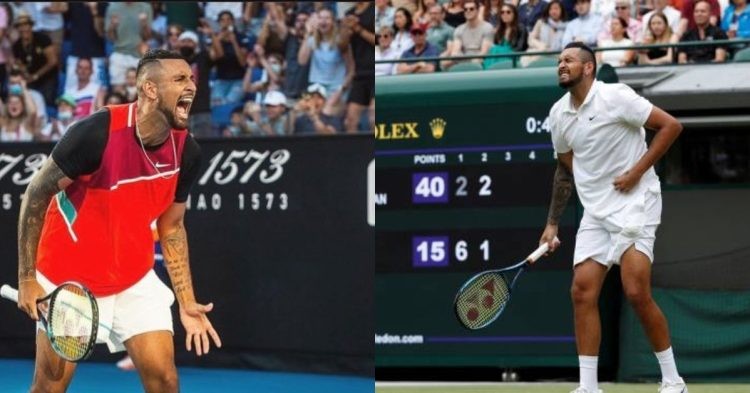 Nick Kyrgios is playing his best tennis at Wimbledon this year and has already won two matches. For round 3, he will face Greece’s Stefanos Tsitsipas and it is one of the most anticipated clashes of the round. However, he has landed in trouble in the middle of all this.

During the first-round match, some spectators showed him disrespect and it really bothered him. It was a five-set match and was obviously physically and mentally tiring for the Australian star. After some point, he decided to give it back and it probably went a little overboard.

In his frustration, Nick Kyrgios spit in the direction of the fan to show he is not like other players. When asked about the same during the post-match conference, he admitted to the spitting and said, “Of one of the people disrespecting me, yes.”

Kyrgios further revealed why he decided to hit back at the spectator. He said, ‘I would not be doing that to someone who was supporting me. Someone just yelled out I was s**t in the crowd today. Is that normal?”

Nick Kyrgios fined $10,000 for spitting during the first-round match

After Kyrgios admitted to the spitting, the authorities took action against the Aussie. He was fined $10,000 (around £8,200) for the offense. Interestingly, it is the biggest fine that has been imposed by Wimbledon authorities this year.

Thirteen other players have also been penalized for some or other reason but Kyrgios tops the list. The second on the list is Alexander Ritschard who was fined £4,105, nearly half of what Kyrgios has to pay.

Kyrgios has always been notorious for breaking rules and arguing with umpires. Many players and fans find him necessarily aggressive and cocky. However, many people love him for his confident attitude and unfiltered talks. Many feel he has the potential to win tournaments but gets caught up with unnecessary controversies.

Furthermore, Kyrgios said, “I know what I bring to the sport. I’m one of the most important people in the sport.” There is an audience that finds Kyrgios entertaining and tunes in to his matches even though he is not a seeded player.