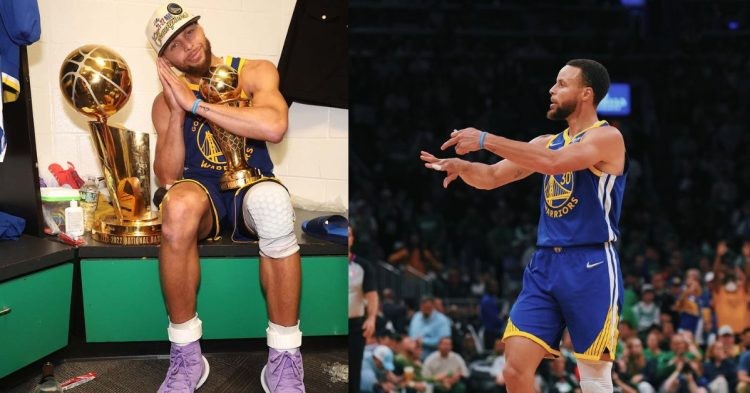 Stephen Curry helped the Golden State Warriors to win their 7th NBA Championship after defeating the Boston Celtics. Many know that Steph was crucial to the title win with his performances. Together with that, Steph also brought home a well-deserved MVP trophy. His contributions to the game remind us of the journey he has been on and how he makes people fall in love with the sport all over again.

Warriors forward Andre Iguodala on Steph Curry: “I think he solidified himself as the best point guard of all time.” pic.twitter.com/NH4cntPO7y

The Point God has always been an all-time great. With his shooting, playmaking, and dribbling, he is also one of the top point guards to ever grace the game. The common opinion among fans & experts would be that the great Magic Johnson tops the list. Since Magic has retired, Steph has changed the way people perceive point guards.

The Chef has redefined the position that is one of the most important on the court. A point guard is usually the player that involves himself with a team’s offense the most and is the best passer. The traditional PGs were not known to be exceptional shooters. However, Steph has managed to take the throne in 3-pointers made of all time.

Curry was always in contention for the best point guard ever, has he made it now? He was always above the rest of the PGs but was always put in second behind Magic. The American will have to go head-to-head against Magic to become the best PG ever. Let’s compare their stats throughout their careers.

Johnson managed to average 19.5 points, 7.2 rebounds, and 11.2 assists per game during his career. Steph, however, has averaged 24.3 points, together with 4.6 rebounds and 6.5 assists per game. The stats clearly show that Steph is more of a shooter than Magic, who is a traditional PG.

Titles won, All-Star appearances, and Finals MVPs are also significant to settle the debate. Curry is behind Magic in titles by just one after he recently won his 4th title. Adding on to that, Magic also takes the All-Star appearances with 12 and Curry with just 8. Steph has also just won his first Finals MVP, whereas Magic boasts three of the same.

It is clear that Magic holds the title of the greatest PG of all time with the overall impact he had on teams. However, we can see that Steph isn’t slowing down anytime soon and is on becoming to become the best PG ever. His recent titles and accidents are evidence that he has what it takes to overtake Magic.