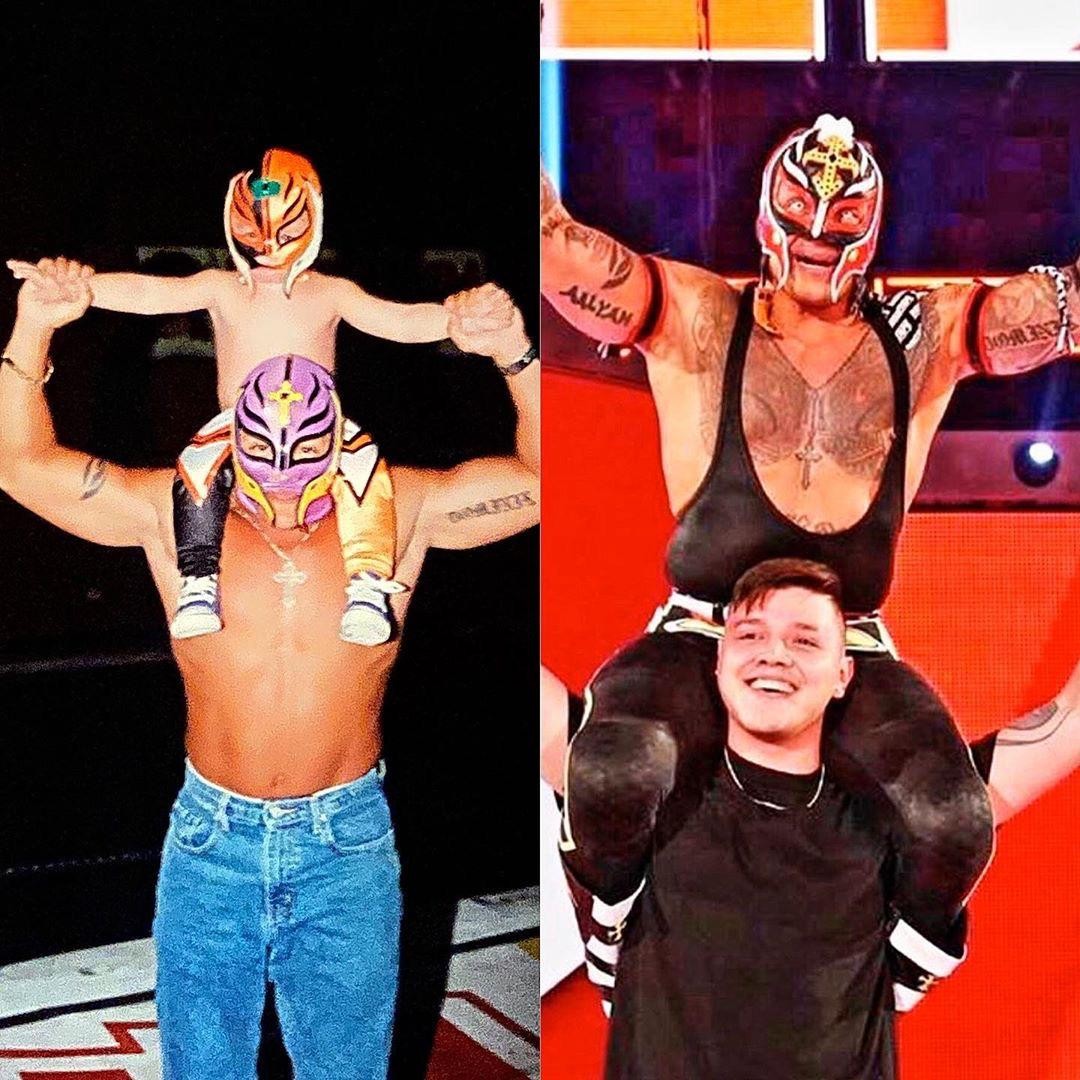 Rey Mysterio Jr. is one of the biggest legends in the world of professional wrestling. Having started his wrestling career at the age of fifteen, the Luchador has been active for over 32 years and is still at his best. A couple of years ago, Dominik, Rey’s son followed his father’s footsteps and signed with WWE. In just a short period of time, Dominik has excelled in the craft.

Rey Mysterio is a GrandSlam Champion in WWE. He and Dom have won the SmackDown tag team titles together. Dom had mentioned once during an interview that winning the tag titles with his father was an honour and he was blessed to be part of the first father-son duo to win the tag team titles. 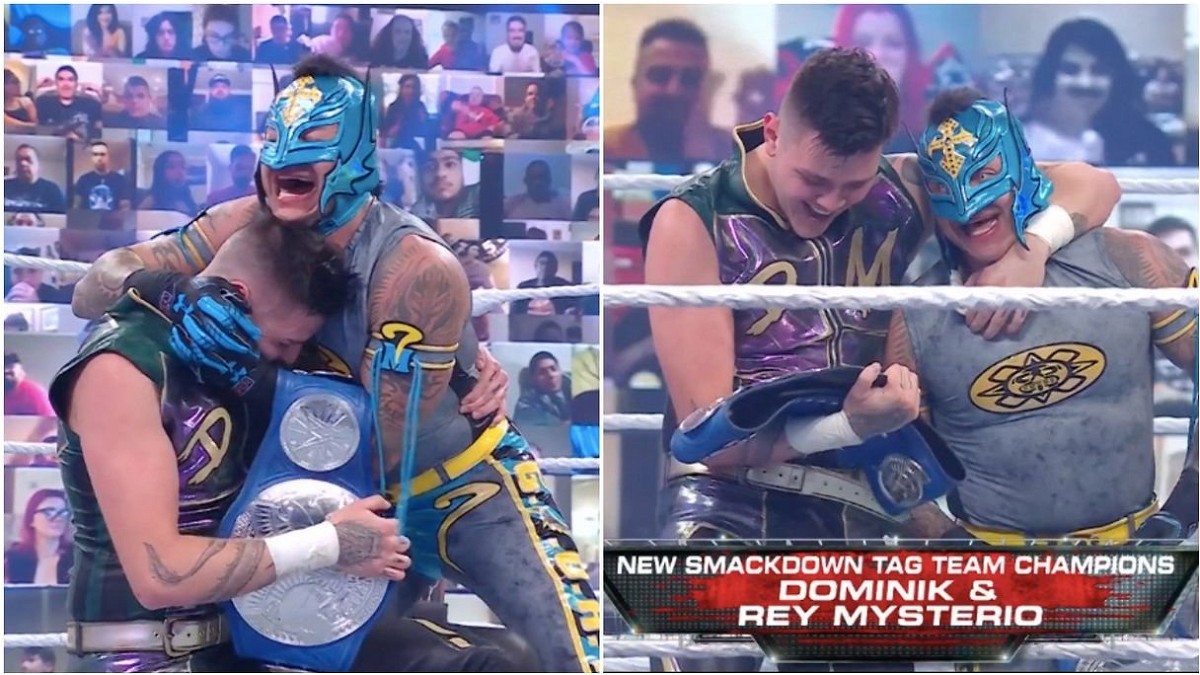 When will Rey Mysterio retire?

The master of the 6-1-9 is 47 years old. So obviously, he does not have a lot of time left in his career. During a recent press conference, he revealed when he will hang up the boots. Rey Mysterio wants to have one epic WrestleMania moment with his son.

How will this come about? Well, I have an idea of what could be a possibility.

One of the most iconic father-son moments for them was the double 6-1-9 at Survivor Series on Brock Lesnar, so imagine how special it would be when they hit the move at the ‘Grandest Stage of them All‘.

Given the fact that Rey Mysterio is talking about his retirement, it means he is thinking about it. So it should be happening in the very near future. With the Royal Rumble coming up in less than a week, the seeds could be planted there for a father vs son battle. That is the most obvious route, but I have decided to take a different route.

The Mysterios are currently on Monday Night Raw.  The duo seems to be having a good friendship building with the Street Profits. This past week on Raw, the father-son duo teamed with the Profits and after the match, the Mysterios dumped the Profits on the outside. The segment came to an end with Rey Mysterio standing tall.

The Mysterios in the Royal Rumble match

Let’s fast-forward to the Royal Rumble event and to be more specific, to the men’s Royal Rumble match. Dominik Mysterio entered the match at number 10 and his father entered at number 13. The duo teamed up to get a few eliminations in until the Profits came out. There was a small stare-down between the two teams and then the brawl began. Dom manages to eliminate Angelo Dawkins and Montez Ford at the same time. Looking at that, Rey was super proud and began to cheer for his son. He was also hyping up the crowd to cheer for Dom as well. Dom also got caught in the moment and climbed the top turnbuckle and celebrating with the fans. Riddle capitalised on this moment and eliminated Dominik. Both

Rey and Dom were shocked and upset at the same time. Rey Mysterio on the other hand, almost won the match. He was one among the final two superstars, but sadly, Rey did not win the match. Mysterio was upset with the fact that, despite being so close to winning his second Royal Rumble he let it slip. Dom also came out and hugged his father and consoled him and appreciated him for putting on another great performance.

The road to WrestleMania begins

The following night on Raw, Dominik came out to cut a promo. He called out his father and asked the WWE Universe to give the master of the 6-1-9 a standing ovation for his performance at the Rumble. Dom then said that his father deserves another big-time title match at WrestleMania. Dom then issued a challenge to the Raw Tag Team Champions to a title match at Mania. The tag team champions, RK-Bro loved the idea but were not ready to just give the Mysterios a title match. The Mysterios had to win a tag team elimination match in order to get the title opportunity.

The tag-team eliminator match took place at the Elimination Chamber event and was also inside the Chamber. The Mysterios eliminated 5 other teams to become the no.1 contenders. Thus the WrestleMania title match was set.

The night had finally arrived. It was the grandest stage of them all. The showcase of the immortals, WrestleMania began. The night opened with the Raw Tag Team Title match. The champions RK-Bro battled the no.1 contenders, The Mysterios. All four stars gave everything they had. With so many near falls, the match was heating up. In the end, Orton hit the RKO on Dominik Mysterio and went for the cover. 1…2… and Dom kicked out. The crowd was stunned, Orton was stunned and furious. Orton was setting up for another RKO, Dom luckily countered the finisher and went for a school-boy roll-up, this time Orton kicked out. That was the last gasp for Dom, he was totally gassed out.

Riddle tagged himself in and looked to take advantage over a tired Dominik. Luckily, Rey came to his son’s rescue. Riddle was well-positioned for a 6-1-9. Rey and Dom together hit the double 6-1-9. Dominik then went for the frog splash, just as Dom was about to hit the splash, Rey tagged himself in and followed Dom’s splash with a frog-splash of his own and pinned Riddle for the win.

Finally, the father-son duo emerged as the victors.  Rey and Dom have their special WrestleMania moment. 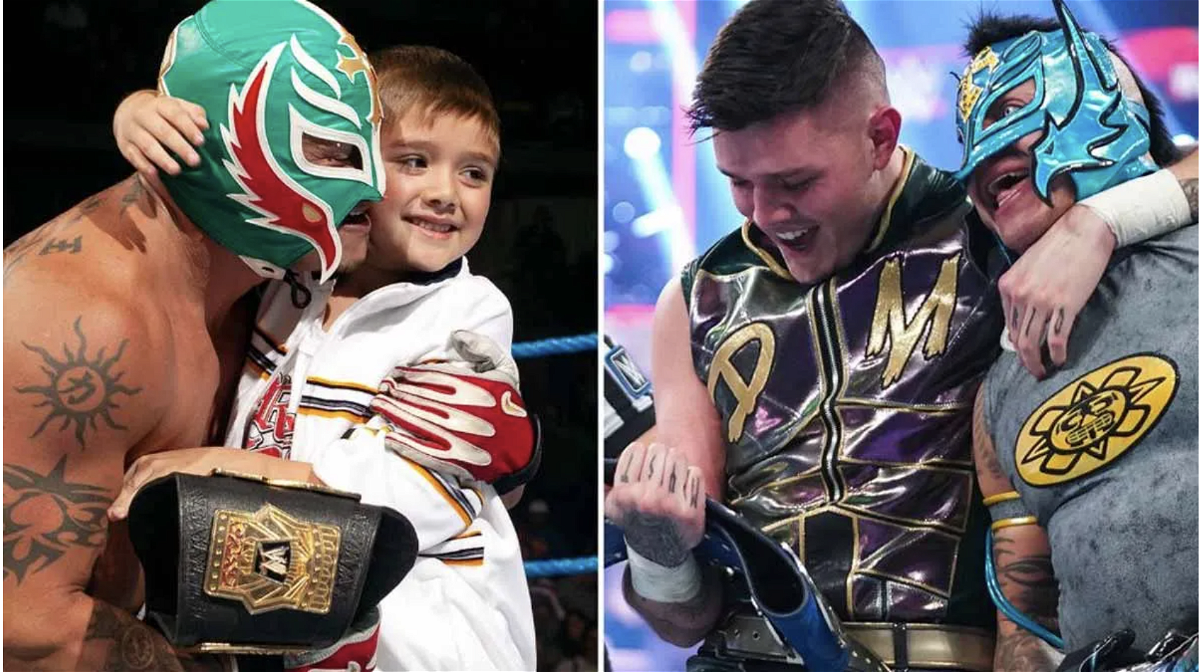 At WrestleMania 22, Rey won his first World title and celebrated with his kid and 16 years later Rey wins the world tag titles with his son.

Upon winning the tag titles, the Mysterios will go on to have a good run as tag team champion until Rey has his final match and retires.

This is how I would book the WrestleMania moment for the Mysterios. I chose to have them win the tag titles rather than fight against each other because I wanted the hands of both the father and the son to be raised on the grand stage.

Would you like to see this happen at WrestleMania or would you prefer Rey to pass the torch onto his son at the Grandest Stage? Let us know in the comments.