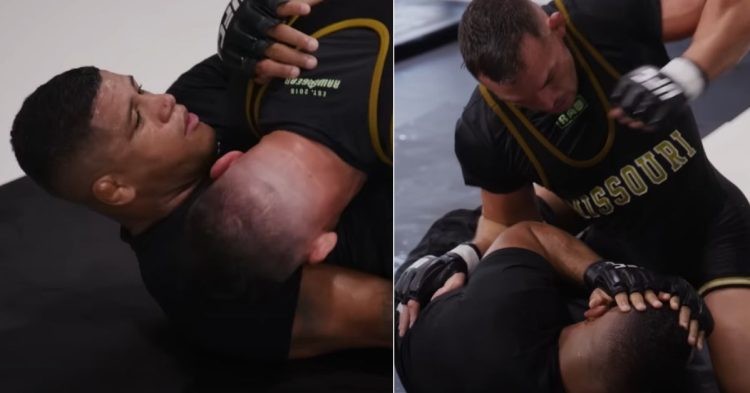 It’s no surprise that Michael Chandler can wrestle! All-America Division 1 wrestler, Chandler is yet to implement wrestling into his game plan during his UFC fights. While we may have seen a lot of it during his time with Bellator, Chandler has largely been a striker in the four fights inside the UFC Octagon.

However, it looks like we could see wrestler Michael Chandler inside the cage at UFC 281 as the former title challenger takes on Dustin Poirier in a three-round fight at UFC 281 inside MSG on November 12.

In the countdown video to UFC 281, Chandler can be seen training with BJJ great and former UFC title challenger Gilbert Burns. It goes without saying, Burns is arguably one of the best grapplers in the history of the division. The Brazilian submission specialist made even the likes of Kamaru Usman force a stand-up fight with him, and Khamzat Chimaev face the toughest fight of his career.

Needless to say, Burns, who formerly competed at lightweight is not too huge a welterweight. And Chandler on the other side is quite huge for his size for the lightweight division. So it makes for a good pair and training partner on the ground. In the past, we have seen Chandler and Usman show us some impressive grappling exchanges.

So will Michael Chandler turn into a wrestler at UFC 281 to beat Dustin Poirier? Well, the lightweight contender is not denying the possibility.

Michael Chandler admits he is not a better striker than Dustin Poirier. However, he is also aware that Poirier is not a better grappler than him. And if we look at it, both Poirier and Chandler hit hard and are known to shut the lights out of their opponents.

“I always have wrestling as a big part of the strategy. I train an all-encompassing full 360-degree game plan from the striking to the grappling to the wrestling to the defense to the footwork to the cardio and strength, and to the speed explosiveness.” Chandler has said.

It will be interesting to see the game plan Chandler adopts at UFC 281. Needless to say, should he get a win over Poirier, a title fight with Islam Makhachev is a real possibility. It’s safe to say we are in for a slugfest when two of the most explosive fighters collide inside the Octagon on November 12.