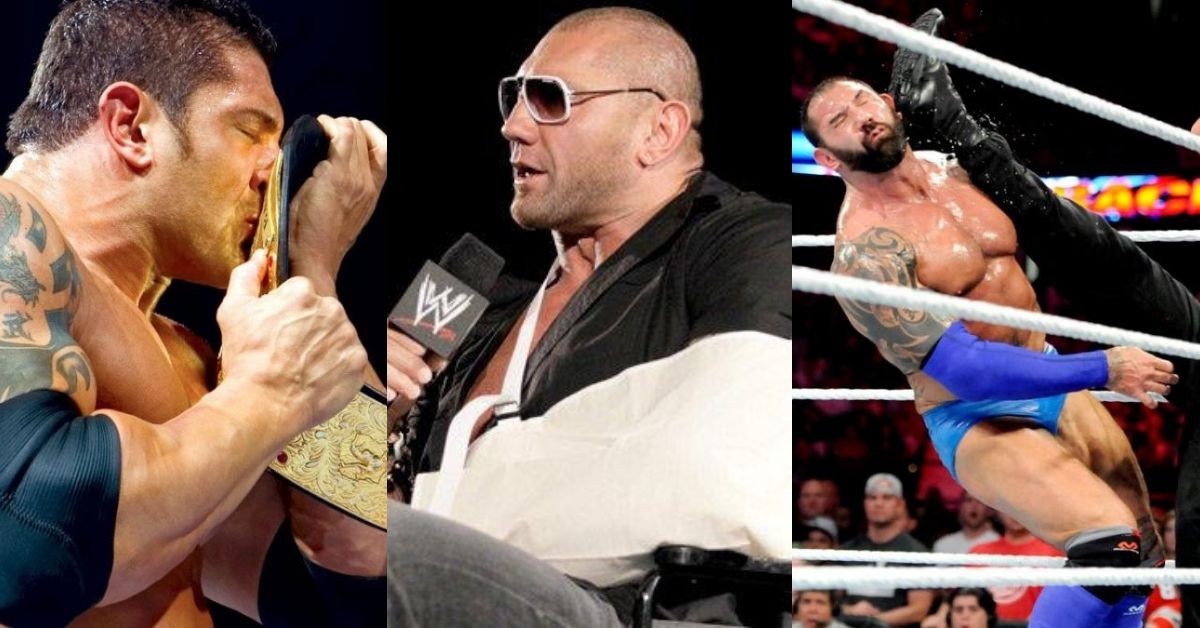 Batista is undeniably one of the biggest superstars WWE has ever had. The Animal completes 2 decades as a WWE legend in the month of May 2022; so we thought it would be a good idea to take a look at 20 years of Batista, and catch up with The Good, The Bad, and The Ugly.

Good: Batista had an illustrious WWE career worthy of Hall of Fame status

John Cena was heroic, Randy Orton was cool, and Brock Lesnar was a beast, but Batista was the true gem of that fabled OVW class of 2002. Though he was the last of those 4 names to become World Champion, his ascent to the top was better than any of theirs.

His rivalry with Triple H leading into WrestleMania 21 was booked to perfection. From him refusing to defer to his Evolution leader, to defying his will and winning the Royal Rumble, and then giving him that infamous “thumbs down”; it was peak Sports Entertainment.

Over the course of his 1st 8-year-run with WWE, Batista became a 6x World Champion. He was synonymous with WWE’s World Heavyweight Championship, winning it on 4 separate occasions.

He had iconic rivalries with the likes of John Cena, Triple H, Randy Orton, Rey Mysterio, Eddie Guerrero, The Undertaker, and a whole host of current and future WWE Hall of Famers. Batista himself is a first-ballot Hall of Famer, being officially announced for the Class of 2020, following his retirement.

His induction was moved ahead due to the pandemic. It will now be held in front of a live audience, as per his request. No update on when that will be, however.

To the @WWEUniverse Unfortunately due to previous obligations I am unable to be a part of the @WWE #HOF this year. By my request they have agreed to induct me at a future ceremony where I’ll be able to properly thank the fans and people who made my career possible???????? #DreamChaser

“The Bad” section of Dave’s WWE career actually begins way before 2014. Batista is a notoriously injury-prone performer. He missed most of his first year with Evolution due to a triceps injury, sitting out most of 2003.

He would continue to be plagued by muscle tears for the rest of his career, most-notably vacating the WWE Championship in 2009 because of a bicep injury, making it the 2nd time Batista vacated a world title. When he left in 2010, he was dealing with an L1 spinal compression.

But no amount of heroic comebacks could ever fix his disastrous 2014 run. WWE dropped the ball with Daniel Bryan by not booking him to even get to WrestleMania 30. So, the fans turned on their plans and booed the returning Animal every chance they got.

This polarizing fan reaction wasn’t new; Dave has admitted he was a more natural heel in the ring. But it was the intensity that soured the taste in his mouth. Chants of “Bootista” & “Bluetista” followed him everywhere till he left the WWE again in 2014; seemingly never to return.

Ugly: Batista really doesn’t like Vince McMahon and the WWE

The fact that The Animal returned to the WWE in 2019 for one last match was surprising; because he has previously made his disdain for the company rather well-known.

During an appearance on Talk Is Jericho, Batista recalled the moment he knew he was done with WWE. He illegally bladed in a 2008 match against Y2J and was fined a $100,000; he called that “soul-sucking”.

Batista seems to have a burning hatred for WWE’s “corporate bulls***”, as he even told Chris Van Vliet that he’d return to do “only house shows” if offered the chance. He says it at 5:10 mins in the clip below.

In a 2017 interview with DailyDead.com, Batista remarked that Triple H & Stephanie McMahon once laughed in his face when he told them Guardians of the Galaxy would be a crossover hit good enough to earn him a spot at SummerSlam 2014.

Batista only returned to the WWE for his retirement match with Triple H, which took place at WrestleMania 35. Since then, he’s stayed retired, and has no plans stepping back into the ring; ever.

While most wrestling retirements aren’t really retirements (see Ric Flair’s WWE retirement or any of Terry Funk’s multiple retirements”, The Animal’s swansong was real. Dave Batista is one of the biggest superstars pro-wrestling has ever seen, and we’d like to congratulate him for completing 20 years in the industry