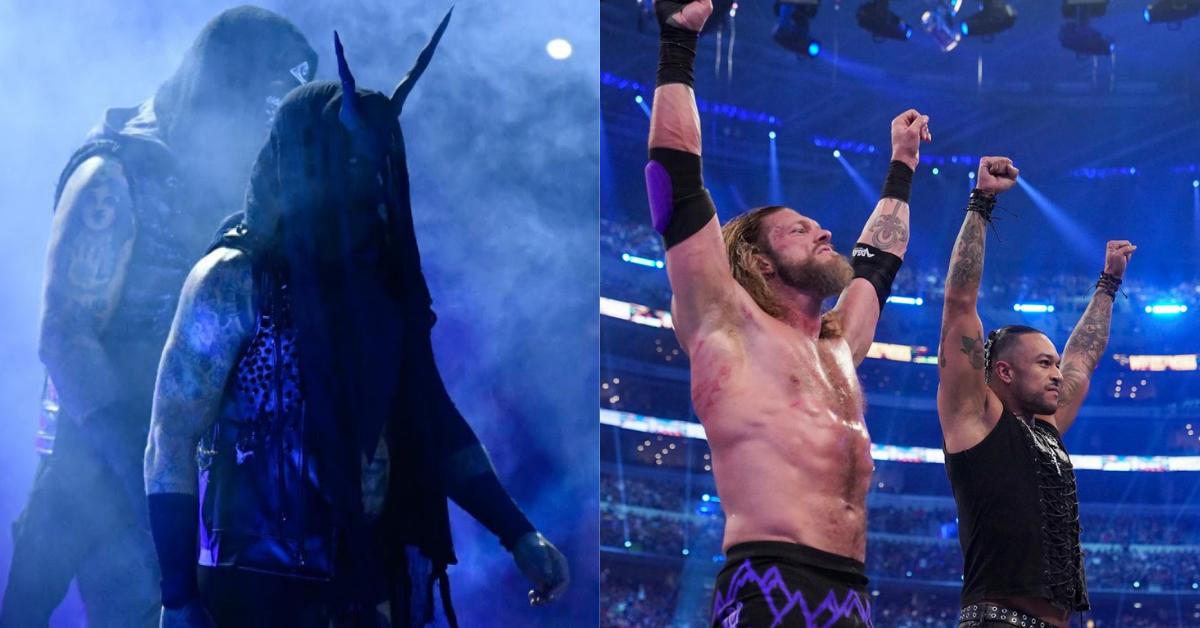 Isn’t it shocking that in 2022, one of the biggest things in the wrestling world is The Rated-R Superstar? Edge has been the talk of the town ever since he turned heel earlier this year, and he took things up a notch by allying with Damien Priest at WrestleMania 38. This duo of darkness looks set to dominate Monday Night Raw. These 5 AEW stars would fit right in with Edge’s new faction.

5. Brian Pillman Jr. is one of the most-underrated AEW stars currently

The son of the Loose Cannon has shown that he definitely inherited his father’s charisma. Brian Pillman Jr. has been wowing fans of All Elite Wrestling with his high-flying athleticism alongside Griff Garrison as part of the Varsity Blondes.

But underneath all that babyface fire is a sneering heel, waiting to take the wrestling world by storm. Flying Brian can definitely go on the mic and needs that added layer of polish and attention to help him break out. He has a definite ceiling in AEW, and by becoming the “loose cannon” of Edge’s new faction, he could establish himself as a major WWE Superstar.

4. Evil Uno can become the herald for Edge’s new faction

Evil Uno is one of those original AEW stars who often goes overlooked because of his ridiculous debut angle. Everything he has done since, however, has been pure gold. He’s a natural in the ring and on the mic, and nowhere was this more evident than during Hangman Page’s ascent to the main event scene.

But he isn’t doing a lot these days besides appearing in backstage segments and BTE skits. His Dark Order peer John Silver & Alex Reynolds are clearly being positioned as the primary tag team of the stable. A move to WWE  as part of Edge’s new faction could re-vitalize his career and give Edge a much-needed verbal sparring partner in the ring.

3. Wardlow can become the next Batista if he joins WWE

Wardlow is going to be World Champion within the next 2 years. That’s just a matter of fact. Mr. Mayhem is one of the best AEW stars today, and even though he has said he doesn’t want to join WWE, that might change soon.

In the wrestling business, a performer who knows his worth will seek to get paid accordingly. If Tony Khan doesn’t play his cards right with Wardlow, he might just rock up in Vince McMahon’s company. The Wardog should be positioned as the Batista of the group, and tear through everyone on the roster before powerbombing Edge into oblivion.

2. Darby Allin is one of the biggest AEW stars today

The fact that Darby Allin isn’t AEW World Champion is enough reason for him to join WWE. The guy is the legitimately the biggest home-grown AEW talent; yes, bigger than Hangman Page as well.

Darby resonates with the audience on a personal level, and his unique presentation will be mutually beneficial for WWE & the New Enigma. He already has the aesthetic down for Edge’s new stable; all he needs to do is get used to scripted promos.

1. MJF joining Edge’s new faction will be the biggest case of AEW stars defecting to WWE

Out of 4 Pillars of All Elite Wrestling, the most-foundational has to be Maxwell Jacob Friedman. MJF became one of the biggest AEW stars by being so horrible that even his parents hate him. But Tony Khan’s top heel has been open about his unhappiness with his current contract, and WWE might just jump on the opportunity to sign him away.

Debuting with Edge’s new faction would be the perfect way to introduce MJF to the WWE Universe. He can genuinely garner Bobby Heenan levels of heat from a  live crowd, and having him team up with The Rated-R Superstar & The Archer of Infamy will elevate them from a generic goth stable into one of the most must-see acts in professional wrestling. Any of these names joining Edge’s new faction would, as a matter of fact, and that is a testament to the abilities of these AEW stars as top-tier performers.

Bayley Takes Her Longest Break From WWE Due to Knee Injury